The collapse of a €400 billion plan to build solar plants in North Africa to power Europe will not affect Brussels’ energy plans, say experts.

Earlier this week the Desertec Foundation finally pulled the plug on the project, becoming the the latest in a series of companies that have terminated their membership with the Desertec Industrial Initiative (Dii), which was tasked with building the farms.

Dii says it plans to maintain investment in North Africa’s solar power infrastructure, which it says could provide 55% of the electricity mix for North Africa, the Middle East (MENA) and Europe by 2030, although its future appears uncertain.

Few analysts appear to have been surprised by the news, and even fewer believe it will have an affect on Europe’s battered renewables industry, which is fighting falling gas and coal prices combined with tightened national budgets.

“The Desertec project has been a high risk proposition that goes back quite some time,” Finlay Colville, vice-president of market analyst company Solarbuzz told RTCC.

He said when market forecasts were generated, analysts did not factor Desertec into their predictions for Europe’s renewable energy potential due to its unpredictable nature. “Right from day one this has been one of those way-out proposals – just chugging along,” he said. 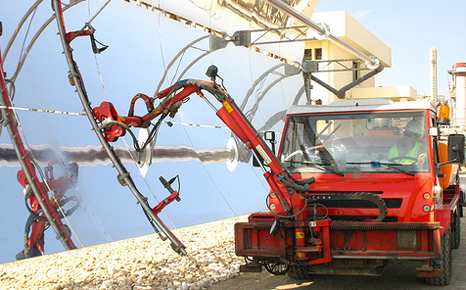 CSP has been cast into the shadows by solar PV. (Source: Green Prophet 1)

Desertec’s long-term goal was to meet about 15% of Europe’s electricity demand by 2050, but an examination of the EU’s Energy Roadmap 2050 reveals it was not factored into the 20% by 2020 renewables target.

Klaus Schmidtke, Dii spokesman, told RTCC: “What we want to happen is to supply for the MENA region and export [to] Europe because we think it’s a good idea for Europe to have quite cheap electricity from the desert.”

But it seems Europe’s energy planners were far more sceptical of the project than they publically let on: “Clearly you need to cooperate with MENA – I think this is absolutely crucial – but does it mean that we need to import it from there? It may not be the best idea,” said Julia Eichhorst, from the European electricity industry association Eurelectric.

Eichhorst said Europe has “a good [renewables] template” and the ability to pass on its experience to other countries. “But importing power from the desert to Europe? It doesn’t make sense,” she said.

She pointed out that the initial Desertec proposal was a great business idea. But now that Europe has access to cheap solar photovoltaics (PV)  – with prices still falling – “you don’t need to export anymore”.

Finlay Colville added that the instability of the region also weighed heavily on the minds of planners: “It’s one thing for the Middle East and North Africa to have control over our oil so why then would the European solar industry want to give them control over piping and solar thermal.”

Desertec’s plans are focused on exporting power predominantly from concentrated solar power (CSP). These require huge capital investments but were a relatively cheap form of electricity generation when the concept was floated in 2009.

Today, improvements in technology and competition in the European solar market are driving down the cost of smaller Photo Voltaic panels (PV) while CSP remains as it was less than ten years ago.

PV module prices are likely to drop from $0.50 per watt in 2012 to just $0.36 per watt by the end of 2017, a development Eichhorst says makes it difficult for other technologies to compete.

“When they started Desertec 10 years ago we didn’t know CSP wouldn’t be on the same track as PV. It has seen a spectacular development and we see a shift in technology choices. PV makes more sense from economical point of view than CSP.”

Siemens pulled out from Desertec in October 2012 citing these very difficulties. Spokesman Torsten Wolf told RTCC: “We expected the CSP market to grow to an annual volume of 4GW. In fact it only is about 1GW.

“So it is a niche market. The PV business margins were not as high as Siemens was targeting. Photovoltaic power systems have dominated the market prices and reduced CSP to a niche market.”

Colville adds: “PV is by far the dominant [form of renewable energy in Europe] and can go on rooftops and large fields. PV has come down in price hugely because it is technology-driven and there are many companies competing. Solar thermal does not have global competition and is not widely deployable. Many investors have lost faith in CSP and many plans have been changed to proven PV technology.”

The end of desert solar?

The unstable political situation in the MENA region adds a barrier to investment – the attack on a BP gas plant in Algeria in January 2013 shook investor confidence, while Mali, Libya, Tunisia all remain volatile.

On its departure, the Desertec Foundation’s director Thiemo Gropp acknowledged that “producing electricity from the deserts…was never an easy task and will always face extreme challenges.”

Market analysts agree, citing the high short term risks involved: “The technology has potential in the earth’s sunbelt, but it has not proven it yet. The market is not taking off, whereas PV has made bigger improvements than it seemed possible just a few years ago,” said Stefan de Haan from IHS.

Dii remains optimistic – and perhaps with good reason. Its spokesman Schmidtke said: “If you look at the plans in the MENA region for the next seven years, you can expect about 50GW renewable energy from solar and wind.”

He called Desertec – whether it exported energy to Europe or not – a success: “We think it would be realistic [to] expect about 750TWh for 2050 but we could also be more.”

“It remains true that there are colossal amounts of clean energy available in desert regions via CSP, PV, and wind power. That potential cannot be ignored,” added Dr Gerry Wolff, Desertec UK coordinator.