Rising sea levels and the growing threat of drought are top of the agenda for a 10-day Pacific Island disaster risk management meeting that opened in Nadi, Fiji, this week.

The fourth Pacific Climate Change Roundtable brings together environment ministers, meteorologists and UN officials to discuss the impact of recent high tides on the Marshall Islands, which engulfed the capital Majuro.

The Islands were suffering from a severe drought before storm surges hit, a phenomenon that is affecting a number of Pacific states, which are acutely vulnerable to climate change.

“Natural disasters such as Cyclone Evan which battered Samoa and Fiji late last year and the devastating earthquake and tsunami in Solomon Islands earlier this year remind us again of the power of nature and the vulnerability of Pacific nations both to climate change and to natural disasters,” said David Sheppard, head of the Secretariat of the Pacific Regional Environment Programme (SPREP). 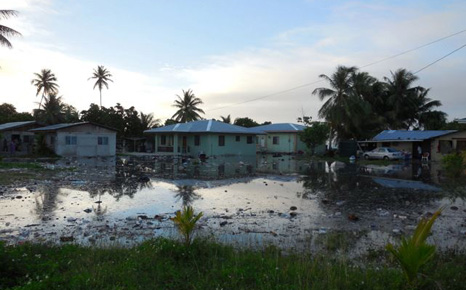 Pacific Islands are often described as being on the front line of climate change, facing droughts, rising sea levels and intense storms linked to global warming.

A temperature rise above 2°C on pre-industrial levels could lead to climatic changes that make many of these islands uninhabitable.

A study published by the UN Environment Programme in November 2012 revealed that 10 million people in 500 communities were at risk in the region.

A 1989 UN report cited Kiribati as one of the countries likely to completely disappear in the 21st century from rising sea levels – the country hopes to secure funds to reopen four disused weather stations at the meeting.

“We see this as a very important forum. We’re hoping to know the key people behind the network itself the Climate Change Roundtable,” said Nenenteiti Teariki-Ruatu, representing Kiribati’s Ministry of Environment, Lands and Agriculture Development.

“We hope also that this forum will help to address the problems, the science of climate change at the regional level and how it links up to the United Nations Framework Convention on Climate Change and the Intergovernmental Panel on Climate Change.”

In 2009 around 150 people died when a tidal wave hit Samoa, American Samoa and Tonga.

“The world is watching and our series of meetings sends a clear message that we must integrate our responses if we are to effectively address the challenges of climate change and natural disasters in this century,” Sheppard added.

“In our region our leaders have continually reminded us of the urgency of climate change and that it is in fact an issue of national security.”