Africa’s tiny ‘sand dams’ can save millions from drought

Water-related diseases kill more than 3.5 million people every year – particularly in dryland regions of the world, making the ability to store and harness water crucial.

The 2011 drought and the resulting famine in East Africa killed 100,000 people and sent food prices soaring. But reversing the devastating effects of climate change is possible.

Sand dams can offer a cost-effective and sustainable solution to mitigating the impacts of climate change, the desertification of drylands and enabling green economic growth in dryland countries. 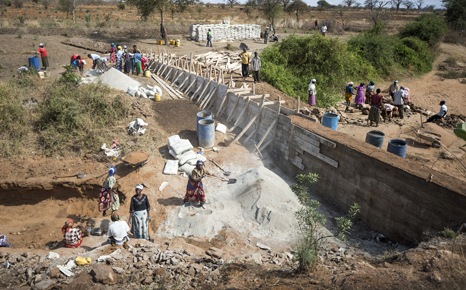 Small dams collect sand, which acts as a resilient store of water even when seasonal rains stop (Source: Excellent Development)

Drylands are home to more than one third of the global population, and make up 44% of all the world’s cultivated systems and account for 50% of its livestock.

Local communities have teamed up with NGOs and the UN to build sand dams, concrete walls built across riverbeds, to combat environmental degradation and desertification that destroys wildlife and habitats.

In Kenya, the Africa Sand Dam Foundation and UK-based NGO Excellent Development work to empower marginalised rural communities to transform their environment for the sustainable and mutual benefit of the local ecosystem and people. They support communities to gain access to clean water for improved food security, health and income.

The intensity of rainfall and the periods over which this rain falls is changing, Simon Maddrell, executive director of Excellent Development told RTCC. Sand dams will help retain water in dry lands to combat water scarcity.

“Because the land is so dry, when rain does fall, up to 85% is simply lost to the oceans. Capturing this water where it falls is essential for improving environments and livelihoods. Sand dams are by far the cheapest way of doing this,” said Maddrell.

Excellent Development presented its sand dams solutions to the UN Convention to Combat Desertification (UNCCD) as part of its Land for Life Awards presented last month.

What is a sand dam?

A sand dam is a reinforced concrete wall built in a seasonal riverbed to capture and store water beneath sand. It can last for at least 30-50 years, requiring virtually no operation and maintenance costs, making it an affordable way to address food and water insecurity.

Seasonal rains quickly fill the dam with water and soil. The soil is made up of silt and sand. The heavier sand sinks behind the dam, whilst the lighter silt washes downstream. The sand then accumulates until the dam is completely full of sand up to the spillway.

Sand dams can capture and store between two to 29 million litres of water beneath the sand for communities of 1,000 people in dryland regions of the world.

Water is stored within the sand making up 25–40% of the total volume which is then extracted by scooping holes in the dam, pipe filtration and building shallow wells with pumps.

Evaporation is reduced to a minimum with the water stored below the sand. The sand also protects the water from parasite carriers such as mosquitoes and snails, reducing the incidence of the world’s two biggest killers of children under five – malaria and diarrhoea.

“Through a strategic partnership, we have committed to community-led sustainable development and the global promotion of sand dam technology as a key enabler of land restoration in drylands. It is our shared vision that sand dams will transform millions of lives,” said Maddrell.

The success of sand dams is relatively straightforward, say researchers from Netherlands-based Delft University of Technology, UNESCO and Acacia Water.

“Water has become available in such quantities within relative short distances from communities that agriculture prospers.”

By harvesting water close to people’s homes it can “save communities an enormous amount of time,” said Maddrell, “giving them more time to invest in sustainable land management: terracing land and planting trees to prevent erosion and keep water in the soil.”

Since 2002, Excellent Development has worked in partnerships to construct 354 sand dams across sub-Saharan Africa.

The UNCCD last month celebrated the efforts of other groups like Excellent Development that demonstrated evidence in combating desertification, land degradation and drought including the Conservation International’s Green Wall Project.

In the past few decades, much of the area in Java, Indonesia, has suffered the loss of trees and plant life while the land was converted to farmland and residential areas. Illegal logging continues in the remaining forested areas.

The project involves creating a green wall of 200 hectares of native trees in the Gunung Gede-Pangrango National Park, on the island of Java, Indonesia, to protect and maintain water flows for millions of users downstream.

Also present in the nominees was Jordan’s Community-Based Rangeland Rehabilitation (CBBR) project that has had a positive impact on grazing plains in the country. The rangeland was damaged by population growth, climate change, regional conflict, inappropriate agricultural practices, and the trucking of water and herds.

This not only indicates better herd health, but also resulted in a significant rise in herders’ incomes. For instance, one herder who earned $8,200 in 2007 saw his income rise to over $20,000 in subsequent years.

Dr. Garrity, speaking on behalf of the judges for the UNCCD’s awards said: “Each of these initiatives has engaged thousands of rural people and they work at the community level, motivating smallholder farming households to actively engage as stewards of the soil.”