Green Climate Fund set to open for business in 2014

The Green Climate Fund (GCF) remains on course to launch in 2014 following progress at its most recent board meeting in South Korea.

The board appointed the GCF’s first executive director and agreed rules for the Private Sector Facility (PSF), which will dictate how commercial organisations interact with the fund.

The GCF was created with the ambition that it would become the principal financial resource to help nations cut carbon and protect themselves against the impact of climate change.

Its launch and the subsequent donations by rich governments are considered vital to ensure trust at the UN climate talks as they continue work on the 2015 global treaty.

Hela Cheikhrouhou, director of energy, environment and climate change at the African Development Bank (AfDB) was announced as the first head of the Fund’s secretariat.

“Together we can make the Fund a central contributor to the global financing of developing countries’ response to climate change, with particular attention to the most vulnerable,” said Cheikhrouhou. 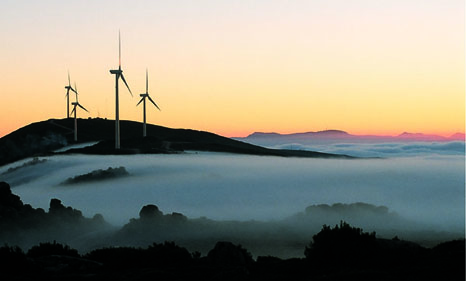 The shape of the GCF is becoming clearer but fears that the most climate vulnerable will be ignored remain (Source: Vestas)

The GCF has been set the target to mobilise $100bn a year by 2020. Recent progress could now see it up and running next year as it chases down that target.

“It’s beginning to get toward an operationalization, which I think is good progress. 2014 could be a good deadline,” Miles Austin, executive director of the Climate Markets and Investment Association (CMIA) told RTCC at the conclusion of last week’s meeting.

The CMIA serves as one of the private sector observers.

“There a few new board members joining at the next meeting so we’ll have to see how the new dynamic works but there is every reason to be optimistic. The board has tackled some hard problems and the two co-chairs have done a good job of getting everyone to work together,” said Austin citing the GCF as an example where the UN process has worked well.

Despite making good progress in working through its agenda, the meeting failed to ease fears over the transparency of the GCF.

Observers had previously been unable to sit in on meetings of the board. Although two civil society representatives are now allowed into the meetings, their opportunities to contribute have been limited so far.

“First we weren’t allowed in the room and now that we are, we aren’t allowed to talk,” said Karen Orenstein, Friends of the Earth US.

Beyond concerns with opening up the process with live webcasting and more access to the official documents being negotiated, Orenstein greater worry is involvement of the private sector.

While Austin explains that private money could triple or even quadruple the contributions from governments, Orenstein is worried that dubious investments by the US could dominate.

In one example, the US Government’s Overseas Private Investment Corporation (OPIC) provided $70m in loans and insurance for an American company to install combined heat and power (CHP) equipment on the Nigerian premises of another US company, Coca-Cola. The money was counted towards the US climate finance contribution despite it directly benefitting two US companies.

“We have to ask how [the GCF] is going to reach those people that the private sector can’t or won’t reach,” Orenstein told RTCC.

Despite wording built into the PSF rules to ensure there is funding for adaptation projects, longstanding worries remain that it will be of secondary interest to investors who have a clearer route to profits from projects that reduce emissions.

VIDEO: New boss of the GCF talks to RTCC at Rio+20