The Arctic could prove to be a climate time bomb according to early results from a NASA experiment to monitor the release of greenhouse gases from thawing permafrost.

With previous data on CO2 and methane released from the carbon rich soils imprecise, the Carbon in Arctic Reservoirs Vulnerability Experiment (CARVE) has been able to fill in the blanks with initial indications creating cause for concern.

While it was known that the release of gases that had previously been trapped in solid ground were now able to escape in larger volumes, CARVE is allowing scientists to estimate the extent of the problem with more accuracy.

“We are definitely looking at a sleeping climate giant. From a scientific perspective the thing I find the most amazing about this is potential for large scale carbon release in the high latitudes,” Charles Miller, principal investigator on CARVE told RTCC. 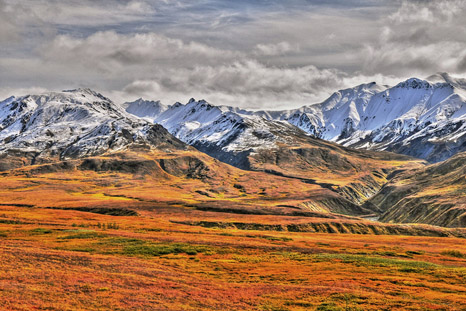 Denali National Park in Alaska. Thawing permafrost in the state could be releasing more GHGs than thought (Source: Flickr/Terry Lawson)

“We have so little information that is quantative and long term and we have so much uncertainty it’s extremely difficult to predict what is going to happen with any degree of certainty.”

The scale of the problem is huge. It is estimated that by 2040 19-45 giga tonnes of CO2 will be released by thawing permafrost. Human activity since the industrial revolution has emitted 350 giga tonnes.

The UNEP Emissions gap report estimates that we are on track to fall 8-13 giga tonnes short of carbon targets that would keep us below the 2°C limit. The revised contribution from thawing permafrost could have serious implications on how we assess progress towards such goals.

“They’ve been overlooked. The way that the land surface is exchanging gases with the atmosphere is far more variable and dynamic in the Arctic than our [current] models suggest,” said Miller.

“The carbon measurements are telling us, now we have more detailed information and on a smaller scale that’s the benefit from CARVE.”

Also important is the type of gas that is emitted. Over a 20 year period the warming effect of methane is more than 50 times potent than that of CO2.

“If just 1% of the permafrost carbon released over a short time period is methane, it will have the same greenhouse impact as the other 99% that is released as carbon dioxide. Characterizing this methane to CO2 ratio is a major CARVE objective,” explained Miller.

Filling in the gaps

The CARVE team spends almost three months of the year taking measurement from a small plane flying 150m above Alaska.

Working in two week blocks each month from May to October, they have been able to capture information on the greenhouse gas levels close to the soils responsible for releasing them.

“In the summer it is also hard to get around. There are no road networks and everything is a giant quagmire. So for many years there were a few intrepid researchers that established ground sites to measure CO2 and methane concentrations but these are fairly isolated from one another and separated by great distances.

“Satellites are good at providing the big picture but their spatial resolution could be 30km and you only get data when they are overhead. Passes could be once a day or weeks, even months apart,” said Miller.

While planting grasses, mangroves and trees can repair degraded soils nearer the equator to increase the amount of carbon the land stores, there is no such fix to retain carbon in thawing permafrost.

“There is no way to mitigate this. We need to cut [human] emissions at the lower latitudes but at the Poles the release of carbon from thawing permafrost is a completely natural feedback of the carbon cycle, I don’t know of any way to actively manage the response,” said Miller.

The CARVE team will continue gathering data for subsequent melting seasons but is not yet ready to provide results that can be plugged into the complex models that predict future climate change said MIller.

“We’re working through quantifying our results and we’ll need a few years of data before we can say something about trends or how what we’re seeing compares with what the climate models are predicting.”