Almost 99% of Australian businesses have shown support for the country’s emissions trading scheme, according to a new survey.

The poll, which received 180 responses out of 573 businesses, was carried out by international consultants AECOM over a period of two weeks from 10 May.

The government plans to replace the carbon tax with an emissions trading scheme sooner than planned, believing it will allow new Prime Minster Kevin Rudd to keep Labor’s commitment to a carbon price but distance his new government from ousted Julia Gillard’s broken promise to not impose a carbon tax. 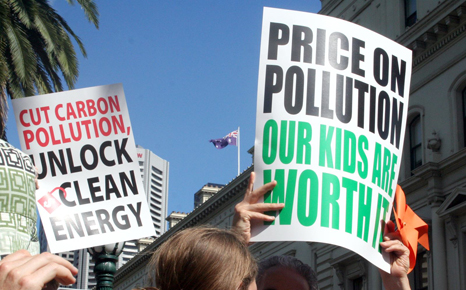 In 2011, protesters demanded a carbon tax to be placed on polluting businesses. (Source: Takver)

It is estimated that the move could cost the government several billion dollars in lost revenue from the A$23 per tonne of CO2 levy.

Covering all commercial sectors, including engineering, transport, manufacturing and waste, almost 99% of businesses surveyed either strongly agreed (87.7%) or agreed (11%) that Australia should aim to reduce its carbon emissions.

In the final quarter of December 2012 emissions in the country increased by 0.4%, according to statistics from the government’s climate change department.

“With five new schemes introduced so far this year, there is a growing momentum for the introduction of market based schemes as an effective way to mitigate the effects of climate change,” said Jennifer Lauber-Patterson, spokesperson at Businesses for a Clean Economy, which commissioned the survey.

Almost 65% of respondents indicated support for an emissions trading scheme with a floating price, while a carbon tax with a fixed price was supported by 28.8% of all companies. Only 3.3% of businesses did not support any form of price-based carbon policy, while another 3.3% were unsure.

The carbon tax is due to rise by A$1.15 per tonne to A$24.15 today while axing the current fixed price for a market-based floating price could see the cost drop to as little as A$6 a tonne.

The results of the survey showed that earlier fears about the possible impact of the current carbon pricing had not been realised. Lauber-Patterson also said that businesses understood that the world is moving on emissions reductions and that carbon pricing is the best way to reduce emissions.

Leader of the opposition Tony Abbott has consistently said he would axe the carbon tax if voted into power  in September.

Although Prime Minister Kevin Rudd is preferable as leader to Abbott, the Labor party is behind in polls and would lose to the Coalition if elections were to be held today. According to The Australian news site, Labor is backed by 35% while the Coalition has 43% of the votes.

“Emission trading schemes are already in place in 34 countries and 12 states including the European Union, Norway, Switzerland, New Zealand and in California, with schemes being established in China and South Korea,” Lauber-Paterson said.

She continued: “The survey results showed that carbon pricing is now being much better received by Australian industry. The message from a good cross section of businesses in the survey seems to be clear: carbon pricing is working, let’s keep it and minimise any further disruption.”