Many birds, amphibians and corals that will suffer the most as a result of climate change are not currently conservation priorities, according to a new study.

Over a period of five years, researchers at the International Union for Conservation of Nature (IUCN) pioneered a new method to assess the vulnerability of species to climate change.

Up to 83% of birds, 66% of amphibians and 70% of corals were identified as highly vulnerable to the impacts of climate change but are not currently considered threatened with extinction on the IUCN Red List of Threatened Species. They are therefore unlikely to be receiving focused conservation attention, according to the study. 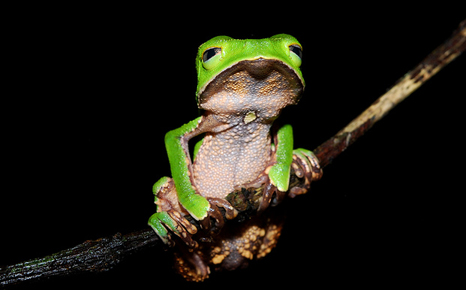 Up to 66% of amphibians were identified as highly vulnerable to the impacts of climate change. (Source: flickr/ggallice)

“The findings revealed some alarming surprises,” said Wendy Foden of IUCN Global Species Programme and leader of the study.

The species are threatened by unsustainable logging and agricultural expansion but also need urgent conservation action in the face of climate change, according to the authors.

The study shows that the Amazon hosts the highest concentrations of the birds and amphibians that are most vulnerable to climate change, and the Coral Triangle of the central Indo-west Pacific contains the majority of climate change vulnerable corals.

“We had to systematically [look at] issues like sensitivity, habitat, diet,” Foden told RTCC.

The study’s novel approach looks at the unique biological and ecological characteristics that make species more or less sensitive or adaptable to climate change. Conventional methods have focussed largely on measuring the amount of change to which species are likely to be exposed. IUCN will use the approach and results to ensure the IUCN Red List continues to provide the best possible assessments of extinction risk, including due to climate change.

The extinction of these species also stretches to the people living in those regions.

“The study has shown that people in the region rely heavily on wild species for their livelihoods, and that this will undoubtedly be disrupted by climate change,” said Jamie Carr of IUCN Global Species Programme and lead author of the Albertine Rift study. “This is particularly important for the poorest and most marginalized communities who rely most directly on wild species to meet their basic needs.”

This new system covers a larger number of species than before because it also looked at environmental triggers that could lead to the extinction of a species, whether it is dependent of other living organisms in the area.

“This was not being addressed in the systems before,” said Foden.

“This is a leap forward for conservation,” said Jean-Christophe Vié, deputy director, IUCN Global Species Programme and a co-author of the study. “As well as having a far clearer picture of which birds, amphibians and corals are most at risk from climate change, we now also know the biological characteristics that create their climate change ‘weak points’. This gives us an enormous advantage in meeting their conservation needs.”

Foden said: “Looking at the species that came out as most vulnerable to climate change – they’re not the species that were necessarily expected. What do we do about it? Obviously we have to reduce our emissions – that’s not rocket science but needs to be reiterated. The species we had been targeting before were quite different to the ones that climate change [will affect] so we need to re-strategise because of shifts in climate.

“The ones that are already threatened by other threats now are going to get hit by a new thing and we should be even more worried about those ones. There are so many species we weren’t focused on [previously] so they’re our new priority.”

Stuart Butchart, head of science at BirdLife International and a key investigator for the study said: “We cannot afford to be complacent about the study’s results. Highly climate change vulnerable species require targeted action to help them adapt to on-going and future climate. Those that already face high extinction risk from threats such as habitat loss, unsustainable use and invasive species are our most urgent priorities.”