Biodiversity’s response to global warming is difficult to predict, but new research shows that species in the distant past have adapted to, and colonised, new and increasingly arid desert zones during a period of dramatic change.

The less encouraging finding from the University of Chile scientists who have studied geological evidence from the Atacama-Sechura desert region − one of the Earth’s oldest and driest deserts − is that this adaptation takes about six million years.

Any wildlife response to dramatic climate change – and the kind predicted in the worst case scenario for the 21st century is certainly in the dramatic category − depends on a very large number of factors. 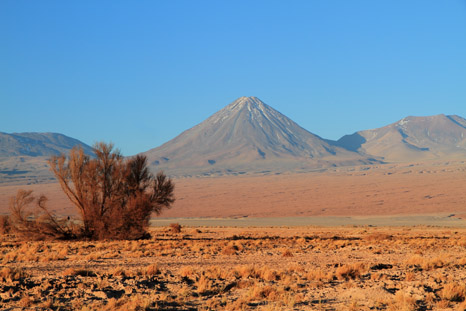 The Atacama desert is one of the oldest and driest in the world (Source: Flickr/Licancabur)

These include how fast plants or small animals can move to cooler zones south or north; what barriers – such as mountain ranges, lakes, cities, motorways or farms − there might be to movement; and, of course, whether the ecosystem that supports any particular species can move at the same rate.

Researchers have repeatedly warned of mass extinction under conditions of climate change, but it has been much harder to calculate the rates at which species might adapt or evolve, and populations recover, in new habitats.

However, there are lessons to be learned from the recent geological past − long before Homo sapiens began to create extra difficulties for the rest of creation.

Climate scientists can date changes in global temperatures with reasonable accuracy, palaeontologists can identify and date fossils of characteristic climate zone species with some precision, and geneticists can measure the rate at which DNA has evolved to adapt to new environments. This last technique now delivers a good measure of evolutionary timelines.

Pablo Guerrero and fellow researchers at the University of Chile’s Department of Ecological Sciences report in the Proceedings of the National Academy of Sciences that they used geological evidence to put dates to the rainfall history of the ancient Atacama-Sechura desert region of Chile and Peru and the DNA readings to measure the rates at which three different kinds of plant and one genus of lizard evolved to colonise the new habitat.

They found that these groups of plants and animals made their homes in the desert only in the last 10 million years – a good 20 million years after the onset of aridity in the region.

There were also huge lags – from 4 million to 14 million years − between the time these creatures moved into the desert region and when they colonised the hyper-arid places. These ultra-dry parts of the region developed about 8 million years ago, but the most diverse of the plant group moved in only two million years ago.

“Similar evolutionary lag times may occur in other organisms and habitats, but these results are important in suggesting that many lineages may require very long time scales to adapt to modern desertification and climate change,” the scientists in Chile report.