The controversial Keystone XL pipeline will only be approved if it does not directly increase greenhouse gas emissions (GHG) President Obama said during his centrepiece climate speech yesterday.

The declaration is the strongest indication yet of the President’s intentions on the projects permit and heaps pressure onto the analysts responsible for assessing its GHG impact.

“The net effects of the pipeline’s impact on our climate will be absolutely critical to determining whether this project is allowed to go forward. It’s relevant,” said Obama putting carbon, rather than local environmental concerns at the heart of the debate. 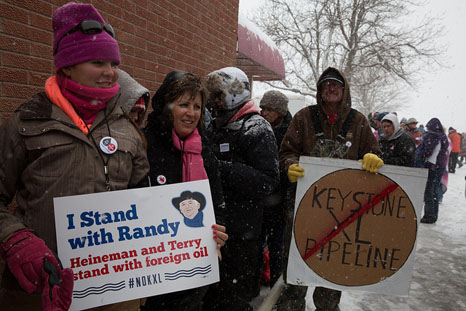 “And the State Department is going through the final stages of evaluating the proposal. That’s how it’s always been done. But I do want to be clear: Allowing the Keystone pipeline to be built requires a finding that doing so would be in our nation’s interest. And our national interest will be served only if this project does not significantly exacerbate the problem of carbon pollution,” he said.

Climate campaigners say the Canadian tar sands, the third largest oil deposits in the world, would have a catastrophic impact on the atmosphere.

Their extraction and production is energy intensive and they also emit more than regular oil when burned.

The State Department released its draft environmental impact assessment of the pipeline in March but although it acknowledges that bitumen-like tar sands oil generated more emissions across its entire lifecycle from “well to wheel”, it did not take that into account.

“After reviewing existing literature, the State Department found up to a 19% increase in well to wheels greenhouse gas emissions from the weighted-average mix of tar sands crudes expected to be transported in Keystone XL relative to the reference crudes in the near term,” wrote Susan Casey-Lefkowitz of the Natural Resources Defense Council (NRDC) at the time of the release.

“These estimates do not even tell the whole story as they do not yet take into account emissions from burning the tar sands byproduct of petcoke or greenhouse gas emissions linked to the land use change from tar sands extraction under Boreal forests and peatlands,” she added.

The final report by the State Department could now be a de-facto approval or rejection of the project.

“Obama’s statement that climate concerns are ‘absolutely critical’ to assessing whether the Keystone XL pipeline should be approved is a measured and cautious approach,” Ed Whittingham, executive director of the Canadian not for profit think tank the Pembina Institute.

“Our analysis shows that filling the proposed pipeline with oilsands bitumen would require a 36% increase in production from today’s levels. In terms of Canada’s greenhouse gas emissions, that’s the equivalent of adding more than 4 million cars to the road.”

Secretary of State John Kerry did not mention Keystone XL in his response to the President’s announcement.