“President Obama is right when he says tackling climate change is a moral obligation and also right when he says cutting carbon pollution will help spark business innovation and create jobs. I welcome his Climate Action Plan. It’s a decisive step by the world’s second largest emitter and demonstrates the growing global momentum toward tackling the threat of dangerous climate change. The UK will work closely with the US on energy efficiency and low carbon technologies, and on securing ambitious global action on climate finance and emission reduction.  We will also keep up the pressure elsewhere, including in Europe.  The EU should adopt a 50% emissions reduction target by 2030 in order to help secure a global deal in 2015.”

Nick Molho, head of climate and energy policy at WWF-UK

“The President’s plan wouldn’t reduce carbon pollution as much as scientists say is needed, but he rightly zeros in on executive branch actions, rather than waiting any longer for Congress. President Obama correctly sees this as an all-hands-on-deck moment requiring a government-wide plan, including action on pollution from the largest source of US emissions — existing dirty power plants. Recognizing that the US needs to meet its international commitments and strongly support robust international action is also crucial as the world works to forge a new global climate pact by 2015.” 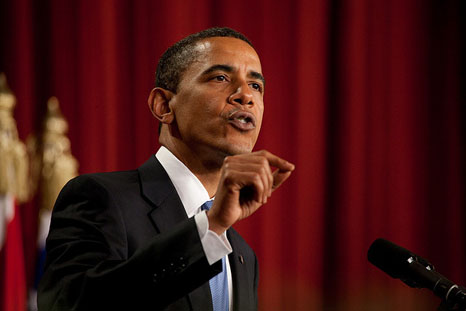 Obama’s climate change plans will not need Congressional approval as they fall in with his Executive power (Source: Flickr/White House)

“Plans to support renewables include streamlining consent procedures, creating demand and providing Federally backed loan guarantees. One could speculate that this is the beginnings of a US Federal Green Investment Bank in this package. Energy efficiency is also a key pillar of this plan.

“We welcome today’s announcement by President Obama that he will keep his Copenhagen promise by implementing important measures to reduce US carbon emissions. But this is a small first step towards climate action. This is not leadership.

“It would be an upside down world if the USA were to try and use this bare minimum of action as a means to pressure other countries to do more. The United States must know this is the first step of a marathon. The next step is for Washington to bring this new ‘can do’ attitude into international climate negotiations in the form of a more constructive position there.”

“The President is embracing policies that will excite people around the world, and if the full potential of this plan is realised then we could look back at this speech as a landmark moment. At the very least it sends a huge signal. For years, since the failure of the Copenhagen summit and the onset of the financial crisis, politicians have ignored this issue. Now the world’s most powerful man is saying, ‘We’re going to talk about climate change again’.”

“The US cannot claim to have led anything in the negotiations so far – apart from some obfuscation. If Obama’s emphasis on ‘ambition, inclusiveness and flexibility’ leads to support for common but differentiated responsibility for emissions reductions and contributions to finance for adaptation then this is to be welcomed.”

“President Obama’s climate action plan is a necessary next step to meet an immediate, worrying shortfall in action to deal with climate change and can be a critical move forward on the path towards a new, global climate agreement. It remains vital that the United States as the world’s largest developed economy is seen to be leading serious action to deal with climate change, both at home and abroad. These new steps will help to meet those goals, if they are implemented to the fullest extent to which they are intended.”

Ambassador Marlene Moses, Permanent Representative to the United Nations for Nauru and Chair of the Alliance of Small Island States

“US President Obama’s announcement represents a positive step on climate change and we hope it translates into even more constructive engagement at the international climate negotiations, particularly when it comes to dramatically reducing greenhouse gases in the next few years, which is essential to keep the seas from washing over some of the world’s lowest lying island nations.

“However, we are painfully aware that coastal erosion, ocean acidification, degraded reefs and fisheries, droughts, floods, and relentless storms represent the new normal for many vulnerable communities. Therefore, any adequate response to climate change must also address permanent losses and damages stemming from the crisis.”

“America’s sportsmen should rally behind President Obama’s new climate plan. Climate change is the single largest threat to hunters and anglers, and to fish & wildlife populations. With Congress unable or unwilling to act, it’s vital for the president to do everything within his power to lower greenhouse gas emissions and rein in global warming. We support the president’s new climate initiative. It will help protect our hunting & fishing, and it gives our children and grandchildren a better chance at a decent future.”