Arnie: Environmentalists should learn from my eco Hummers

Arnold Schwarzenegger has warned against trying to use guilt to win support for climate policies, using the example of his fleet of green Humvees.

Asked how Americans could be persuaded to support action on climate change and give up their love of big cars, Schwarzenegger said that was not the message to be pushing.

“We should not make people guilty about driving big or fast or powerful cars but we should let them know that they can be part of the solution by changing the technology in their cars,” he said.

“For example my Hummers are now biofuel and hydrogen and one of them is being converted to electric right now. We don’t have to make people feel guilty.”

“If you want to sit in your Jacuzzi all day long do it, but have solar panels. We need to make people feel part of the solution and make the environment movement more hip, snappy, modern and sexy,” he added. 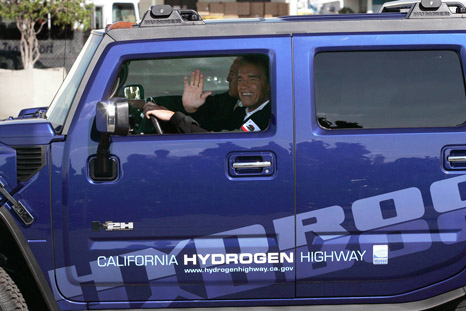 The Governator in the H2H hydrogen powered Hummer. The car would usually run on a V8 six litre petrol engine (Source: GM Motors)

The former Governor of California was in Brussels to announce an agreement between his R20 Regions for Climate Action network and the European Commission.

The R20 focuses on action at the sub-national level. Something Schwarzenegger achieved during his stint as Governor. The state’s cap and trade system, signed into law during his term launched in November last year and has proved to be a relative success.

He added that while a global agreement to reduce emissions was important, there was still plenty to be done below the national level.

“The world is waiting for Kyoto 2, an international treaty so we have a common goal for a sustainable energy future. I believe there are still a lot of challenges ahead to get this treaty done even though great progress is being made.

“When I was governor of the state of California we didn’t wait for wash or any kind of international treaty. We moved forward very aggressively and passed great laws that became an inspiration to other states and to other countries all over the world. This is why I created the R20.”

President Obama is expected to announce a suite of measures on Tuesday to reduce emissions but is highly unlikely to be able to go as far as California and establish a national cap on emissions.