Over the last few years, violent storms, leading to flooding and mudslides, have become more frequent in Brazil.

In 2011, violent rainstorms wreaked havoc in and around Rio. Houses built on steep hillsides were swept away by devastating mudslides. An entire shantytown built on top of a former rubbish dump in Niteroi collapsed, killing over 50 inhabitants.

In Novo Friburgo, a mountainous town settled by 265 Swiss families in 1820, and the surrounding region, over 1000 people died in January 2011, after several days of violent rains.

Sirens had sounded to warn people to evacuate, but many people either did not hear them, or ignored them. The permanent solution of course, would be to provide better housing in safer areas, but that is still many years away.

Now a scheme successfully tried on the other side of the Atlantic is to be launched in the region. The scheme was piloted on Lake Victoria, a giant lake the size of Ireland, which is shared by three countries, Uganda, Kenya and Tanzania. 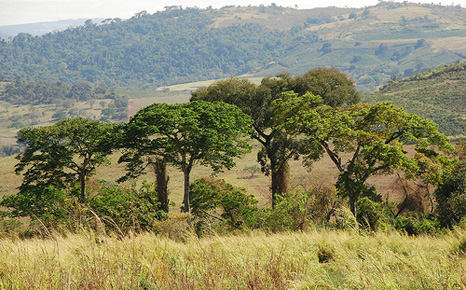 Warnings of high rainfall are transmitted by SMS about four hours before they are due to Brazilian farmers (Pic: Flickr/mauriguanandi)

Its size makes it large enough to create its own weather, and conditions can change suddenly, with winds quickly whipping up six-foot waves capable of capsizing ferries and fishing boats.

Up to five thousand of the Lake’s estimated 200,000 fishermen were dying every year due to these freak storms.

The African scheme is a joint initiative between the UK’s Met Office, the Ugandan Department of Meteorology, and the telecommunications company Ericsson. Text messages are sent to the mobile phones of local fishermen, warning them of changes in the weather.

Before, there were no forecasting services relevant to fishermen in the region, making access to weather information almost impossible.

Tom Butcher, External Relations Manager at the Met Office explained: “A lot of the weather patterns on the lake happen on quite a small scale and are driven by the difference in temperature between the lake’s water and the surrounding land. You get warm moist air at night, rising above the lake and sucking in colder air from over the land surface – a convective process that creates a lot of storms.”

To get round the problem of illiteracy among the fishermen, the forecasters at Uganda’s Department of Meteorology adopted the Met Office’s traffic light system of colour-coded weather warnings.

Red means a high likelihood of 20 knots+ winds, or severe thunderstorms, therefore a high hazard threshold and advice to ‘take action’. The project was enthusiastically received by the fishermen and within a few weeks it was saving lives.

In Rio, the scheme involves attaching rain gauges (pluviometers) to mobile phone masts to give warnings in real time of extreme weather and high rainfalls to mobile phone users with 3G, via their providers.

The scheme will eventually be extended to 19 Brazilian states, with the attachment of rain gauges to 1500 masts. Experience has shown that sirens are often ignored, or not heard, but a direct message aimed at a phone user personally is much more effective.

This is the first scheme to use a direct link between rain gauges and the mobile phone users.

A small-scale scheme, based on information collected via satellite and from a network of meteorological radars maintained by the administration, is already in use, under a partnership between the Rio city authorities, the Civil Defence department and four major mobile phone operators.

The warnings of high rainfall are transmitted by SMS about four hours before they are due. The Civil Defence also has a special warning programme for 3,500 health agents who work in 117 risk areas.

The agents, each responsible for about 100 families, are then expected to spread the warnings by word of mouth. When the rainfall tops 40mm in an hour, or 125 mm in 24 hours, then the agents receive messages telling them to evacuate people.

Mobile phone weather warnings are not only being used for rainfall. It may surprise some readers, who think of Brazil only as a tropical country, to know that in the southern state of Paraná, frost alerts for the region’s coffee farmers are also being sent by SMS to mobile phones.

The initiative, which began in 2012, is the result of a partnership between IAPAR, Parana’s Agricultural Institute and the state’s meteorological system, SIMEPAR.

Paulo Henrique Caramori, coordinator of Iapar’s Agrometeorology department, said: “the SMS service is direct and very quick and enables the coffee growers to speed up protection measures for their trees”.