US Secretary of State John Kerry has invited India to join the agreement it signed with China to phase out hydroflourocarbons (HFCs), the family of super greenhouse gases.

Speaking on arrival in New Delhi last night, Kerry also said there were huge opportunities for India to act on climate change while boosting its development at the same time.

The US and China agreed last month to work to cut HFCs, which are thousands of times more potent warming gases than CO2, and Kerry believes the tactic could work for India as well.

“We can work together to globally phase down hydrofluorocarbons. And we can eliminate the equivalent of roughly two years’ worth of current global emissions by the year 2050 if we were to do that,” he said. 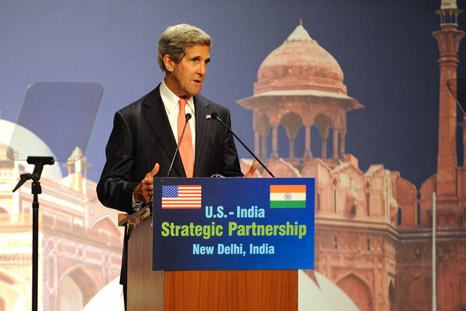 John Kerry reassured India that it can tackle climate change and develop at the same time (Source: Flickr/466px)

“And India can join China and the United States and other major economies in order to rapidly develop joint technology and pilot programs for low- or no-carbon strategies, which are essential,” he added.

India has resisted efforts to tackle HFCs in the past. It has concerns that the replacement chemicals and technologies will be too costly. Natasha Hurley, a campaigner with the London-based Environmental Investigation Agency EIA told RTCC last month that the Indian government had close ties to the hydroflouro industry, which could also deter progress on a phase-out.

A report released by the EIA today has suggested that emissions of HFCs by India and China could skyrocket without adequate regulation.

India is expected to be hit hard by climate change with many of its most vulnerable citizens likely to suffer the most.

Flooding in the Uttarakhand province has already killed 600 people, deaths that could have been avoided through better climate adaptation planning according to experts based in India.

The science suggests that rainfall in the region is only going to get more unpredictable.

Responding to these threats is a challenge for the whole world to participate in solving, Kerry said urging India to keep working positively at the UNFCCC climate talks.

India has been cautious in embracing plans for a new global treaty on climate change, set to be agreed in 2015 and take force in 2020. It fears that binding commitments to tackle greenhouse gas emissions could hamper its development.

“I’m convinced that we can move towards a global agreement that puts us on track to avert the most dangerous climate change,” said Kerry adding that a new deal would have to be “sensitive to and respectful of the diversity of national circumstances and capabilities; and that is fair, pragmatic, and can actually evolve with changing circumstances.

“In the United States you have a willing partner to help you to develop, but to develop in ways that allow all of us to act responsibly simultaneously.”

The clearest opportunity according to Kerry is the spread of clean energy technology.

“Combating climate change and reducing energy poverty are actually two interconnected challenges that cannot be separated. Access to energy is the essential ingredient of economic development. You can’t create jobs in the dark,” he said.

India currently relies heavily on coal for its electricity generation. Many rural areas not connected to the electricity grid miss out with 400m Indians lacking access to electricity according to the World Bank. Off-grid generation, from solar, wind and biomass are increasing in popularity.

Indian firms such as Tata and Suzlon are also taking advantage of larger renewable projects.

“This is not just about air and water and weather. This is about jobs. It’s about economy. It’s about growth,” said Kerry.

“And as we look forward, India and the United States, with our traditions of innovation and our tradition of technology creation, we are particularly well-positioned together to ready ourselves and roll up our sleeves and take advantage of this opportunity.”