A $2.5bn fund could be enough to keep the UN’s carbon offset market alive until a potential successor is in place as part of the new 2015 climate treaty.

The Clean Development Mechanism (CDM) is currently struggling with the price of offsetting one tonne of CO2 approaching zero.

Joan MacNaughton, vice chair of the high-level policy dialogue that reviewed potential solutions to the CDM’s predicament in 2012, has backed plans for a fund to inject extra money into the market.

The CDM allows companies in the industrialised world to invest in emission reducing projects in developing countries and earn carbon credits in the process. With governments setting low emission reduction targets, the demand for credits has collapsed.

“The fund is a temporary, interim means to ensure we can retain its functionality,” MacNaughton told RTCC. “The real solution is in increasing the demand for offset credits and that means higher levels of ambition on emission reductions by the parties and reaching that agreement will take some time.

“Until we get an agreement on a new mechanism and higher [mitigation] ambition, then we will be able to take advantage of these projects. All of this is not about maintaining the market for its own sake. It’s about retaining it as a means to an end, which is reducing greenhouse gases. Without it the wound continues to bleed.” 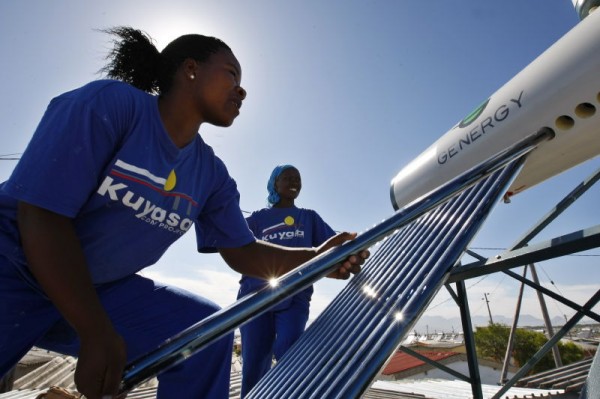 The CDM has offset more than 1 billion tonnes of CO2 since its launch (Source: CDM Photo Contest/Nic Bothma)

Governments are currently negotiating a new global climate treaty that is likely to include a new market mechanism.

MacNaughton said that keeping the CDM alive until that point would allow the expertise that it has built up to be transferred to the new instrument.

“If don’t act and we just wait for the demand issue to be resolved we risk losing the functionality that we have in the market and that would be highly regrettable,” she said.

“There is a degree of expertise there in project design, measuring, reporting and verification, things that will be needed for any new market mechanism. That expertise is leaking away.”

The idea for the fund was first mooted in the recommendations made by MacNaughton’s board and carried forward in an independent report funded by the UN climate agency the UNFCCC.

MacNaughton suggested three potential sources for the fund including a requirement for sectors “not playing a full role in emissions reduction, like aviation” to purchase offsets from the CDM, establishing a voluntary offset programme for the public and businesses or straight government support.

“$2.5bn may sound a lot but that’s not a lot compared to the bank bailouts,” said MacNaughton.

“There is a lot of money going into [government] support for clean energy projects and other emission reduction activities. If some of that money were channelled into this fund it would have a bigger impact because it could leverage private sector investment,” she said

MacNaughton, who is also executive chair of the World Energy Council’s Trilemma programme, said they had found support among the business community for the fund. She remains adamant that the CDM has a long term future.

“After it got over an initial learning curve, which it was inevitably going to have to do, it has issued a billion credits, has proven it can do it, it’s built up the capacity and it’s worth sustaining because of the contribution it is going to make to climate mitigation.”