Climate change initiatives that make money are more popular than those aimed at improving the health of residents, according to a new survey.

The Carbon Disclosure Project (CDP) examined the climate change strategies of 110 cities worldwide, analysing the risks faced by residents and the the economic benefits of adaptation and mitigation plans.

It concluded that over $40 million in savings a year is saved from tackling climate change through energy efficiency measures, and reveals that 91% of cities believe that working to combat climate change will lead to economic opportunities for their cities.

“For a long time, there was the belief that measures that addressed climate change would be a burden on business. But recent advances in technology that make buildings smarter and more efficient are both good for the environment and equally good for business,” said Dan Probst, Chairman, Energy and Sustainability Services from global real estate service Jones Lang LaSalle.

The study, compiled by the C40, a network of the world’s megacities taking action to reduce GHG emissions, and AECOM Technology Corporation, also revealed that 63% of cities report that they anticipate investment from businesses in new industries. 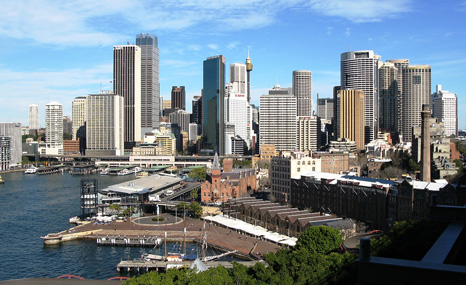 Sydney has been reducing carbon emissions by investing in renewable energy.

Changwon in South Korea has plans to utilise sewage sludge for bus fuel and to install solar power plants in unused areas to drive new business growth, while Sydney has been reducing carbon emissions by investing in renewable energy and improving local transport through fuel efficiency technology.

In the US, Houston expects a planned $4 billion expansion to its light rail will bring economic benefits for both businesses and residents in the city, while Dallas reports the number of green jobs in the city rising as GHG emissions fall.

Adaptation investment as a result of increases in extreme weather is also benefiting local business.

Flooding due to storms has compelled the city of Belo Horizonte in Brazil to improve the city’s storm water and transport infrastructure, reducing flooding and safeguarding high-risk businesses.

In New York, direct and indirect losses from Sandy amounted to around $19 billion in damages – placing Mayor Mike Bloomberg’s proposed $20 billion investment in adaptation into perspective.

More than half of reporting cities (55%) are undertaking emissions reduction actions that promote walking and cycling, which directly and indirectly lead to improved public health. And over three-quarters of cities’ reported adaptation actions will protect human health from the negative effects of climate change.

Houston  is aiming to develop multi-use urban centres in many locations throughout the city. The city government expects its plans to lead to “improved air quality, reduced GHG emissions and better public health which results in an enhanced quality of life for all Houstonians.”

Mexico City is planning for more frequent heat waves in the short-term which could lead to an increased risk of the spread of disease in the city by improving its epidemiological monitoring during summers.

“The impact derived of warmer days has been verified recently,” reports the city government. “The local Secretary of Health reports more gastrointestinal cases in the population.”

CDP’s research indicates that inaction could lead to “potentially catastrophic costs” that could harm businesses and drive up health costs.