Obama set to roll out new US emission regulations

US President Barack Obama says a “grim alternative” awaits the world if rising greenhouse gas emissions are not addressed, warning of storms, floods and “new waves of refugees”.

Speaking at the Brandenberg Gate in Berlin alongside German Chancellor Angela Merkel, Obama called for “bold action” around the world, praising Germany and the EU for its climate leadership.

And in a move that will please climate and clean energy advocates, the President indicated the US was now willing to “do more” to cut its own carbon footprint.

“Peace with justice means refusing to condemn our children to a harsher, less hospitable planet. The effort to slow climate change requires bold action. And on this, Germany and Europe have led,” he said.

“In the United States, we have recently doubled our renewable energy from clean sources like wind and solar power.  We’re doubling fuel efficiency on our cars. Our dangerous carbon emissions have come down. But we know we have to do more – and we will do more. 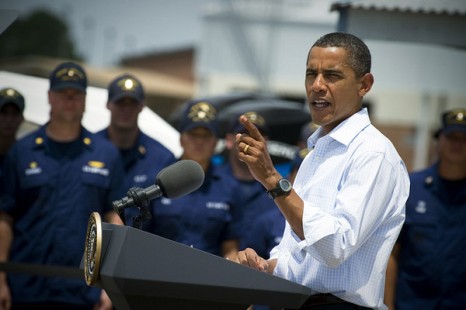 Obama warned of “complacency among our Western democracies”, saying wider issues around the world needed to be addressed

“With a global middle class consuming more energy every day, this must now be an effort of all nations, not just some. For the grim alternative affects all nations – more severe storms, more famine and floods, new waves of refugees, coastlines that vanish, oceans that rise. This is the future we must avert.”

Obama’s warning came on the same day a White House official said the administration was preparing to release a new set of climate policies.

Speaking at an event on Wednesday hosted by The New Republic, Heather Zichal, deputy assistant to the president for energy and climate change, suggested new policies were likely to fully exploit the powers of the Clean Air Act, which recognises carbon dioxide as a pollutant.

“This is a tool whether it’s the car rule or the mercury rule, we know that we can implement it with success,” the National Journal reports her as saying.

“[The] EPA [Environmental Protection Agency] has been working very hard on rules that focus specifically on greenhouse gases from the coal sector,” she said. “They’re doing a lot of important work in that space.”

Zichal also suggested the White House was exploring ways of tightening energy-efficiency standards and speeding up development of renewable energy on public lands. Neither require new legislation she said.

US carbon dioxide emissions have fallen nearly 12% over the past five years, and are currently down to 1996 levels.

While some reduction is attributable to the economic downturn between 2008 and 2010, the continuing decline up to present suggests that additional and more persistent factors are at work.

Efforts within the White House to promote climate action received another boost on Wednesday with the news that Kevin Knobloch, president of the Union of Concerned Scientists, is to be Energy Secretary Ernest Moniz’s chief of staff.

“Over the past few weeks, one of my top priorities has been to assemble a leadership team of incredibly talented individuals from both inside and outside the Department,” Moniz wrote in an email to staff, later adding: “I am confident that Kevin’s deep understanding of energy issues and experience as an outstanding manager will be of incredible value to the Department.”

Since his appointment in March, Moniz has moved rapidly to fill his team, which is likely to spearhead efforts along with the EPA to cut US reliance on fossil fuels.

“The priorities of Secretary Moniz and the DOE, including reducing carbon emissions, expanding clean renewable energy, and reducing the threat of nuclear weapons and fissile material, have been passions throughout my career,” Knobloch said in a statement.

“This is a strong opportunity to improve the health and safety of all Americans.”