WWF: 3% of carbon cuts could save US business $190 billion

US corporations have been advised cutting carbon emissions by 3.2% could also result in an annual saving of $190 billion.

A report by UK-based Carbon Disclosure Project (CDP) and WWF revealed that emission cuts of 3% would be enough to put the US corporate sector on track for a 25% reduction against 1990 levels – equivalent to cutting total annual greenhouse gas emissions in 2020 by 1.2 gigatonnes of CO2 on 2010 levels.

Investment data from 500 companies publicly trading on the US stock market showed 79% saw higher returns on investments aimed specifically at reducing carbon emissions than on their overall portfolios. These earned an average ROI of 196%, with an average payback period of between two and three years.

“World governments have moved far too slow to address the climate change threat and people are looking for leadership from the brands they trust to take concrete actions now,” said Carter Roberts, President and CEO of WWF.

“These numbers provide a glimpse into the future – where smart companies slashed emissions, increased profits and helped secure a better future for all of us.” 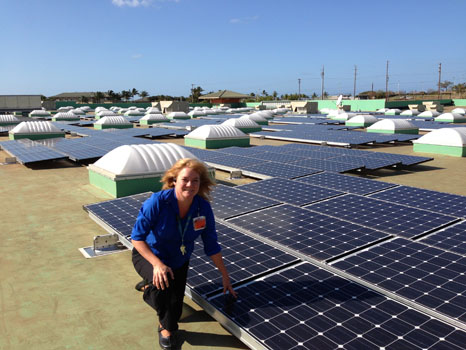 Walmart has installed solar panels on many of its stores. (Source: Walmart)

CDP and WWF say companies would only need to invest between 3-4% of their capital expenditure in carbon reduction projects each year to capture these savings.

However, not all companies can raise this capital. The report advises capital constraints can be overcome by incorporating energy efficiency into existing operational improvement programmes thereby negating the need to allocate additional capital.

Effortless as this may sound, the report highlights other barriers. Management can also act as an obstacle to reducing carbon in the workplace. A concrete business case needs to be made in a bid to change their focus from the short-term outlook of investing in driving growth to a more long-term plan towards energy efficiency.

Most companies may feel they do not have adequate expertise in this field in order to put in place the most cost-efficient solution, the report found. However, the simple answer to this is to bring in external providers.

The report warns that waiting until 2020 to implement the changes it suggests would be too late. CDP and WWF have calculated that companies would need to cut carbon emissions by 9.7% annually to meet the minimum 2050 target.

Engage with the wider community

CDP and WWF advise US companies keen to capture the full potential of emissions reduction need to explore wider collaborations. These include local and national governments, NGOs, industry associations and research partners to encourage policy development.

Campaigners in the US are currently waiting for President Barack Obama to unveil measures to combat climate change, which could possibly including Environmental Protection Agency curbs on power plant emissions.

Mark Kenber, CEO of The Climate Group which endorsed BT’s methodology, said: “Net Good is not another form of corporate responsibility; it’s a new way of doing business. The Climate Group is delighted to be working with BT and other businesses at the forefront of innovation to help them adopt Net Good practices, engage stakeholders and achieve tangible, measurable change in the communities they operate in”.