Speaking on Tuesday in Brussels during a during a CBI/EU Corporate Leaders Group event, Davey warned the consequences of inaction in the face of record emission levels were severe, calling on the European Union to adopt a 50% carbon reduction target by 2030.

“There will always be those with a vested interest in the status quo. Who seek to create doubt where there is certainty,” he said. “And you will always get crackpots and conspiracy theorists who will deny they have a nose on their face if it suits them.

“But the truth is this: while forecasts of the future rate at which the world will warm differ, and while many accept we will see periods when warming temporarily plateaus, all the scientific evidence is in one direction.

“And climate change’s long-term impact on the global economy? Well, we can be sure it will make current economic troubles look mild in comparison.” 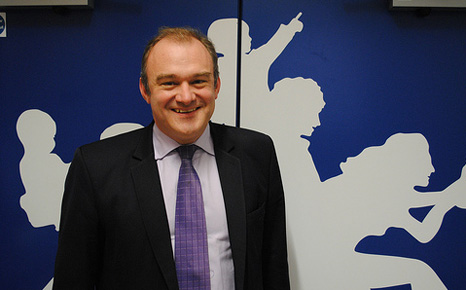 The Secretary of State’s speech could have been seen as a veiled message to elements of the European business community who have frustrated efforts to reform the bloc’s emission trading scheme, as well as members of the House of Lords taking part in a debate on the UK energy bill late on Tuesday.

During that debate former UK Chancellor and well-known climate sceptic Lord Lawson told his fellow peers attempts by the UK government to meet climate targets were “stupid”, reportedly adding that the “whole of this filth was predicated on a global [climate] agreement”.

Davey’s call for the EU to increase its 2030 carbon reduction target will be praised by many campaign groups, but it is unlikely to gain traction among member states like Poland that rely heavily on coal to generate electricity.

A bid to include a target to decarbonise the UK’s electricity generation by 2030 was defeated by 290 votes to 267 in Parliament at the start of June.

Under the amendment to the energy bill, electricity generators would have had to reduce their carbon production to nearly zero by 2030, forcing them to use more renewables, nuclear and employ embryonic carbon, capture and storage methods.

Less popular will be his confirmation that the UK opposes an EU-wide energy efficiency target, despite widespread agreement that this is one of the cheapest ways to cut CO2 emissions.

“We should not pre-judge the balance between increasing efficiency and deploying other low-carbon measures to meet the greenhouse gas target,” he said, arguing the UK needed to “retain flexibility”.

Davey’s backing for the EU’s floundering emission trading scheme (ETS) was significant, given its immediate future is likely to be agreed on in the coming weeks.

The ETS is suffering from a lack of demand and oversupply of carbon credits, leading to a chronically low price, reducing its effectiveness in incentivising emission reduction.

One attempt to boost those prices by restricting the supply of credits failed in April. A new proposal is set to be discussed at the EU Environment Committee today, with a vote to be taken in the EU Parliament in July.

“Supply of allowances massively outstrips demand in the system. The system was certainly not design-proofed against the extraordinary economic conditions we have faced in Europe recently,” Davey said.

“But the EU ETS has been and should remain our primary tool to reduce industrial greenhouse gas emissions.

“Companies who want to see the right conditions to invest in low carbon technology and infrastructure are increasingly making the business case for a stronger EU ETS.

“So reform of the system is not just desirable: it’s an essential priority.”