Two important habitats for marine life, coral reefs and eelgrass meadows, will survive climate change but it will make them vulnerable.

Ocean acidification will make coral skeletons more feeble and coral reefs more vulnerable to battering by the seas – but it may not kill the corals, according to new research from the University of California, Santa Cruz.

The Californian scientists report in the Proceedings of the National Academy of Sciences (PNAS) that they tested coral’s response to changes in future ocean chemistry not by experiments in a tank in a laboratory, but under real conditions – off Mexico’s Yucatan Peninsula where submarine springs naturally alter the chemistry of the surrounding sea water.

“People have seen similar effects in laboratory experiments,” said Adina Paytan, of the university’s Institute of Marine Sciences. “We looked in places where corals are exposed to lower pH for their entire lifespan. The good news is that they don’t just die. They are able to grow and calcify, but they are not producing robust structures.” 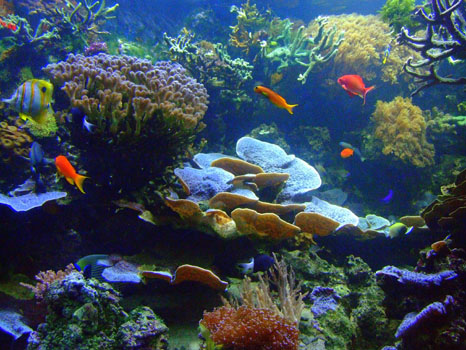 By monitoring seawater chemistry near natural submarine springs, and by examining cores from colonies of an important Caribbean reef-building coral called Porites asteroids, the scientists were able to show that predicted future changes in water chemistry did have consequences for creatures that exploit that chemistry: it became more demanding for the coral animals to build up the blocks of calcium carbonate skeletons. As the skeletons become less dense, so they become more vulnerable to storm waves, and to coral predators.

Corals are also vulnerable to temperature rise, and recent research has shown that corals can recover slowly from devastating spells of heat. Now it seems they can survive changes in ocean acidity. The question of course is whether reefs can survive both at the same time – and other stresses such as pollution and overfishing.

Meanwhile, far away to the north and across the Atlantic, Swedish researchers at the University of Gothenburg have been testing the effect of both rising temperatures and changes in sea chemistry on another important marine ecosystem: the eelgrass meadows.

Christian Alsterberg reports in the PNAS that they raised the temperature in laboratory tanks containing eelgrass, while at the same time bubbling extra carbon dioxide through the water, to simulate the real changes predicted in the decades to come.

The aim was to see how the plants, and the animals for which the plants form a natural habitat, responded. As water temperatures increased, for instance, so did the metabolism of many of the crustaceans that live in the eelgrass meadows.

As a consequence, the animals consumed more algae, and grazed the meadows more efficiently. Benthic microalgae on the sediment of the meadows responded more vigorously. Overall, there seemed to be no great effect on the meadows.

But that depended on the presence of crustaceans: without these small, algae-eating animals, the outcome could have been much worse. The research is just another piece in the vast jigsaw puzzle of climate science, in which small changes can have complex outcomes.

“The experiment also taught us the importance of investigating climate change using several different approaches, in order to fully understand its effects and to predict future impacts,” said Alsterberg.