American scientists have a new explanation for one of the great ecological disasters of the 1980s.

The alarming near-disappearance of Lake Chad – a giant body of water that nourished crops in the Sahel region – was, they say, caused by air pollution: old-fashioned smog and soot from factory chimneys and coal-burning power plants in Europe and America.

The initial explanation had been a much simpler one, and pinned the guilt on the locals.

Lake Chad, which extended over 25,000 square kilometres in the 1960s, shrank to a 20th of its former area by the end of the last century, all because of overgrazing and too great a demand for water for irrigation, geographers had once argued.

The consequences for the local peoples of Nigeria, Chad, Cameroon and Niger were devastating, and triggered global concern, especially as the summer rains repeatedly failed and the lake was not seasonally replenished. 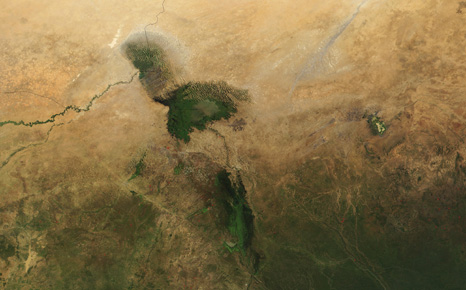 Lake Chad has been subject to an arid climate that has endured a dramatic decrease in rainfall over the past forty years (Pic: NASA)

Later, Lake Chad became an awful example of the possible consequences of global warming. In the latest twist in the story, scientists at the University of Washington in the US have pointed to another culprit: the sulphate aerosol.

Aerosols pumped from chimneys and exhaust pipes in the developed world scattered in the atmosphere and reflected sunlight back into space, to cool the entire northern hemisphere, the region with the greatest land mass, the highest economic development and the most factory chimneys.

In response to a small change in overall conditions the tropical rain belt shifted southwards with a steady decrease in precipitation in the Sahel from the 1950s onward.  The lowest ever recorded rainfall in the region was during the early 1980s, “perhaps the most striking precipitation change in the 20th century observational record,” say Yen-Ting Hwang and colleagues in Geophysical Research Letters.

In fact, the authors are careful to say this is “in part” an explanation of the drought in the Sahel: complex natural changes have complex causes, and both global climate change and pressure from human population growth remain implicated.

Hwang’s study used six decades of continuous data from rain gauges to link the drought to a global shift in tropical rainfall, and then used 26 different climate models to make the link between hemisphere temperatures and the pattern of rainfall.

The Sahel was not the only region affected: northern India and parts of South America experienced drier decades, while places at the southern edge of the tropical rain belt, such as north-east Brazil and the African Great Lakes, were wetter than normal.

As clean air legislation passed both in the US and Europe slowly cleared the skies, the northern hemisphere began to warm faster than the southern hemisphere, and the tropical rain belt began to shift north again.

A team at the University of California, Berkeley, in April reported in the Journal of Climate, published by the American Meteorological Society, that temperature differences measured over a century coincided with changes in the pattern of tropical rainfall.

The largest difference – a drop of about half a degree Celsius in the northern hemisphere in the late 1960s, coincided with a 30-year drought in the Sahel, the growth of the deserts in the Sahara and the failures of the monsoons in India and east Asia.

The research is a reminder that climate patterns are sensitive to even very small average shifts in temperature on a very large scale; that what happens in one region can quite dramatically affect conditions in another part of the globe; and that human actions in some of the richest regions of the planet can have cruel consequences for those trying to make a living in the poorest places.

Meanwhile, although the rains have returned, Lake Chad is still very much diminished.