G8 leaders have reaffirmed their commitment to cutting levels of greenhouse gases and agreeing a climate change deal in 2015.

Syria and the parlous state of the world economy ensured climate issues were relegated to a G8 foreign Ministers meeting in the Autumn.

But a statement released moments after talks closed, the leaders of the world’s most developed countries said they would continue to work with parties at the United Nations to ensure global warming does not exceed dangerous levels.

“We recognise climate change as a contributing factor in increased economic and security risks globally. The G8 has agreed to consider means to better respond to this challenge and its associated risks, recalling that international climate policy and sustainable economic development are mutually reinforcing,” it reads.

“We remain strongly committed to addressing the urgent need to reduce greenhouse gas emissions significantly by 2020 and to pursue our low carbon path afterwards, with a view to doing our part to limit effectively the increase in global temperature below 2ºC above pre-industrial levels, consistent with science.” 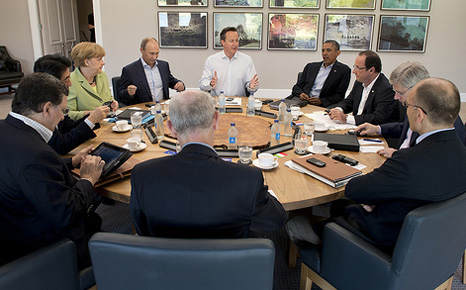 The statement says signatories are still focused on signing the emissions treaty in 2015, which will come into effect in 2020 and replace the Kyoto Protocol as the world’s only binding climate deal.

But leaders also noted the huge action deficit between what is currently being done to reduce carbon emissions and what is being done, quantified in a 2012 UN Environment Programme report in 2012 at eight gigatonnes.

“We also note with grave concern the gap between current country pledges and what is needed, and will work towards increasing mitigation ambition in the period to 2020,” the statement reads.

“We reiterate our commitment to the developed countries’ goal of mobilising jointly $100 billion of climate finance per year by 2020 from a wide variety of sources in the context of meaningful mitigation actions and transparency on implementation and are advancing our efforts to continue to improve the transparency of international climate finance flows.”

It adds: “G8 members should over time apply the Busan common transparency standards to their respective Development Finance Institutions and international public climate finance flows consistent with the reporting of climate finance under the UN Framework Convention on Climate Change (UNFCCC).”

Finance has become an increasingly hot topic at UN negotiations, with developing countries claiming pledges and promises have not materialised from richer nations.

A finance leader’s summit may be held ahead of the main summit in Warsaw this coming November – with the focus firmly on G8 members given their position as leading donors.

Efforts to agree an international emissions deal on aviation and shipping emissions, often called bunkers, also received a boost in the statement with a promise from G8 members to support an “ambitious package related to both market-based and non-market based measures” in September.

Talks on shipping under the International Maritime Organisation (IMO) continue.