UN drought chief: ‘famine dehumanizes us, but it is not a fate’

Drought claims more lives than any other disaster. Over 1.6 billion people have fallen victim since 1979.

For over three decades, the international community has grappled with drought impacts and their mitigation. But relief still dominates. In most cases, the response is too late.

To date, only one country in the world has a comprehensive national drought policy. Why? Droughts are never sudden, so why do they claim lives on par or more than sudden disasters?

Why has the lack of political will to invest in systems to prepare for, respond to and manage drought and its risks persisted when communities from India to Kenya, from United States to Australia show that drought mitigation and resilience are not only viable, but affordable options? 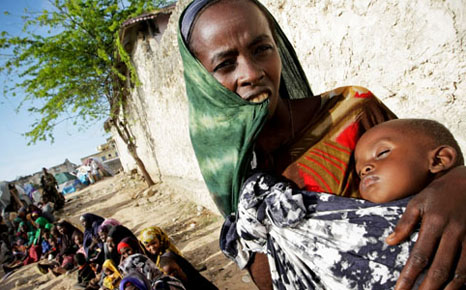 Aid agencies estimate that up to 100,000 people died in the 2011 drought that hit Somalia, Ethiopia and Kenya (Pic: UN)

The most affected communities are not standing by but are leading the way to drought resilience and water security.

While we pondered and planned the actions to take in the Sahel, for instance, affected communities in Niger and Burkina Faso invested in agroforestry and protected over 5 million hectares of farmland from 1975.

In the latter half of this period, villagers in the Tahoua region of Niger saw a dramatic rise in the water table by as much as 14 metres, and were less vulnerable to the most recent droughts in the region.

In future, droughts are expected to be more severe, more frequent and more widespread due to climate change. This will impact water availability in many regions of the world. Globally, over 1 billion people live under severe water constraints. By 2030, half the global population will suffer this fate unless we act with urgency.

Today, we announce the winners of the 2013 Land for Life Award, to recognize innovative community initiatives that can be replicated to strengthen the resilience of vulnerable and affected populations. What is needed now are policies to attract investment to scale them up and roll them out.

Today, Eritrea, Hungary, Portugal and Thailand unveil their Drylands Champions, whose zeal, drive and sacrifice keep alive the hope for a productive land heritage for children yet unborn.

These are the global land heroes of our time. Against all odds, even as the new land rush soars, they are keeping up the fight for appropriate land use practices.

Investing in our resilience today costs a fraction of the relief costs we will pay tomorrow, and its benefits are worth far more. Becoming a drought-resilient global society is not only possible and affordable, it must be our first and only option.

Droughts dehumanize us all, but they are not a fate.

So let us give life to the political pact we made in March in Geneva at the High Level Meeting on National Drought Policy, and set up comprehensive national drought management policies. Policies to render us proactive towards drought, and help us to measure and manage drought risks.

Policies to improve public awareness and preparedness. Policies that place drought resilience and the sound management of natural resources at the heart of our national development plans.

Let this be our collective goal in observance of the World Day to Combat Desertification today. Don’t let our future dry up through inaction.