Finance ministers are set to be invited to the forthcoming UN climate summit in Warsaw in November, RTCC understands.

The move could be critical given negotiations on funding often require high-level commitments the environment and energy officials attending international negotiations cannot provide.

The ministers’ presence at the next Conference of the Parties (COP) in November, could shift climate finance discussions beyond a longstanding barrier, described by one negotiator as the “that’s above my pay grade” defence.

Venezuelan climate negotiator Claudia Salerno told RTCC she welcomed the prospect of a new level of engagement from finance ministries.

“To have finance ministers in Warsaw, and that they understand they have to be part of the process, is not a minor step,” she said. “They usually get together in settings outside of this process and this is going to be the first time that the COP is calling them to be part of it. It’s important.”

Artur Runge-Metzger, head of the EU delegation warned that while the meeting was positive, people should not to expect any pledged numbers in Warsaw.

“There have been some consultations going on in the background but in Warsaw finance will be right on the table. It’s planned to have a meeting of finance ministers so it’s going to be an important issue. I’m not sure about big decisions on numbers,” he told RTCC. 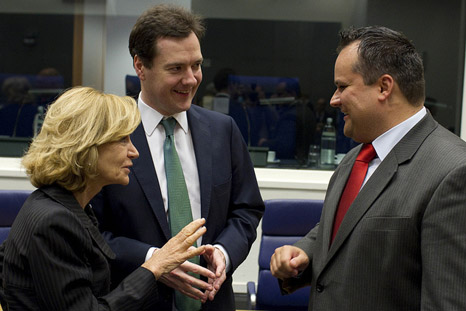 The Spanish, UK and Dutch finance and economy ministers. It is hoped they and their peers will be represented in Warsaw (Source: Flickr/©UK Representation to the EU)

Despite that, he said their presence could motivate countries looking to receive finance to solidify details on what they would spend it on.

“The good thing if you have finance ministers coming, is that they will always ask, ‘you are asking me to spend money, please tell me, what for?’ In that respect it is good for finance ministers to come a little closer to the process and see what the spending is for. There might be some disconnect in some parts of the world in that respect,” he added.

When asked by RTCC for details on the proposed meeting of finance ministers, incoming COP President and Polish Environment Minister Marcin Korolec, confirmed they were reviewing the current format of finance talks for the Warsaw summit.

“We will have a discussion on finance. Shape and form still to be decided though,” he said via Twitter.

RTCC is still awaiting a response from the UK Treasury after requesting confirmation as to whether Chancellor George Osborne had been invited and if he would attend.

A roundtable for finance ministers at the COP14 meeting in Poznan in 2008 was poorly attended, despite being chaired by UN secretary general Ban Ki-moon.

The presence of senior finance figures would please poorer nations countries. In their closing statement ay the UN talks in Bonn, the group of Least Developed Countries (LDCs) called on nations contributing climate finance to provide details on the size of those pledges before the end of this year.

Governments have committed to provide $100bn a year of climate finance by 2020 via the Green Climate Fund. There are fears that if much of this money is raised from private sector sources profitability will trump need.

A climate finance meeting organised by the US State Department earlier this year was criticised for putting too much focus on private sources of funding.

Many developing countries are cautious about making binding commitments to tackle greenhouse gases without assurances on financial, technical and logistical support.

Governments agreed at the last meeting in Doha to provide around $10bn a year till 2015. China has led calls for a “roadmap” to indicate how current levels will be ramped up to the promised levels for 2020.

This week’s meeting of the G8 could provide an additional opportunity for leader’s to discuss climate finance with the member’s likely to be the main donors in the future. Together they make-up around half the world’s economy and almost half global emissions from fossil fuel combustion.

While finance talks are focused on two main functions, reducing greenhouse gas emissions and helping fund projects that allow communities to cope with the impacts of climate change, a third strand labelled ‘loss and damage’ has bee suggested.

The plan, which involves creating a climate compensation mechanism,  is supported by the Alliance of Small Island States (AOSIS) who are losing land and freshwater resources to encroaching seas, as well as suffering increasingly frequent extreme weather events.

Solomon Islands climate change Ambassador Colin Beck says the proposal, suggested in Doha last year, must be carried into the next phase of the negotiations. “Loss and damage is a key ask for us in terms of moving forward. It’s about helping nations who are coping with disasters that are way beyond their capacity to deal with,” he told RTCC.

“We hope finance ministers will change the dynamics that have gone on over the years and that at the highest level, when we make commitments those commitments are honoured.”

A gathering of finance ministers could potentially clear up what has become one of the more damaging rows during the UN climate negotiations.  There is disagreement over whether the Fast Start Finance commitment of $30bn between 2010-2012, was met by donor nations.

The EU, Japan and the US all claim to have met their commitments but observers say much of the pledged money is yet to filter through.

“COP19 cannot have the same outcome on finance as last year’s Doha negotiations, where developed countries got away without making any concrete commitments to climate finance or any indication of how they plan to scale up to meet the $100 billion goal by 2020,” he added.

“If developed countries take these steps in Warsaw, it would send a real signal that they are taking their obligations seriously and are genuinely interested in making progress in these negotiations.”