If Bill Gates was so inclined, he could reduce the world’s temperature by one degree.

All it would takes is a fleet of high altitude planes, releasing millions of tonnes of sulphur dioxide into the stratosphere, deflecting the sun’s rays from planet earth.

The start-up costs of this technique, called Solar Radiation Management (SRM) are around $10 billion, with running costs of around $5 billion a year. That’s peanuts compared to current climate mitigation and adaptation estimates.

Solutions to global warming that do not require large cuts in emissions are likely to become increasingly popular as reports of soaring carbon dioxide levels, melting Arctic ice and high warming projections continue to make the news.

SRM is one of a flock of schemes that comes under the geoengineering umbrella. Others include cloud whitening, carbon capture and storage and ocean fertilization.

As interest in these grow, international efforts to agree on a global climate treaty grind on – with any deal unlikely to come into effect before 2020. By then some analysts say 1.5-2°C of warming may already be ‘locked into the system’. 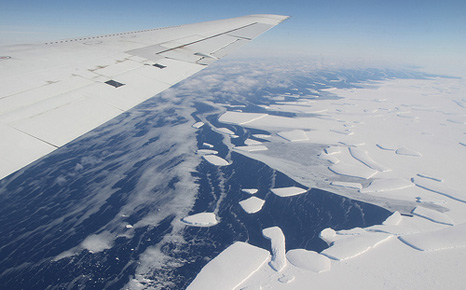 The rate of melt in the Arctic could be slowed by spraying aerosol particles into the stratosphere – reducing the sun’s power (Pic: NASA Goddard)

In January the World Economic Forum listed the hijacking of the global climate by ‘rogue geoengineering’ as one of the major risks in 2013.

Microsoft founder Gates, who has funded research into geoengineering, is unlikely to pay for a small airforce to change the world’s weather. Nor has he indicated he has any intention of doing so.

But it is instructive to learn that the planet’s climate could be so dramatically altered by one very rich person or a few determined countries, and scientists who are studying these techniques warn they come with profound risks.

“We have never tried any large scale weather or climate manipulation, so I don’t know we know how well it works,” Matt Watson, who runs the Spice project at Bristol University, told RTCC.

“My position is that I am terrified about the loss of Arctic sea ice, it’s a profound and hugely visual signal of our failure to act as stewards of the planet, but at the same time I don’t want to be pumping 5-10 million tonnes of sulphuric acid into the stratosphere, because I have no idea what it would do.”

The 1991 eruption of Mount Pinatubo in the Philippines illustrates the link between temperature and particles in the stratosphere.

That event caused the world to experience a 0.5°C temperature drop for two years (it later returned to previous levels), although Watson says it’s only now, 20 years on, that the true effects are being understood.

At the same time, we are getting a better idea of what some radical schemes could achieve.

A paper by Jim Haywood from Exeter University published in the journal Nature Climate Change indicated attempts to release sulphate particles about the Equator over a 50 -year period could also dramatically affect rainfall patterns in Africa.

“If you inject just into one hemisphere that’s where you start to have hemispherical imbalance in the energy budget, and that’s what the paper was looking at,” he told RTCC.

“As soon as you get that, you start to move the ITCZ (Intertropical Convergence Zone) which carries an awful lot of the precipitation.

“So if you cooled down the northern hemisphere what you will do is move the ITCZ to the south – you’ll move monsoon circulation south. Alternatively if you did it in the southern hemisphere you could move it north.”

Haywood’s research, based on the Met Office’s HADGEM2 modelling software illustrates how complex the earth’s systems are.

Particles injected into the northern hemisphere would cause drought in Niger, Mali, Burkina Faso, Senegal and Chad. Move that into the south and while the Sahel would flourish, north-eastern Brazil would suffer.

Haywood warns that another side-effect of greening the Sahel would be to increase Atlantic hurricane frequency by about 20% – that’s 20% more Hurricane Katrina’s hitting the US East Coast.

“With geoengineering there is no magic bullet. You will improve conditions in one part of the planet, but they will deteriorate in others,” he said. “There are winners and losers. Then you get into the whole moral and ethical deliberation – who chooses?”

It is currently unclear who would have a final say on a global geoengineering effort: “no body exists that will take ownership of the problem, and there are no rules and regulations,” said Watson.

A Royal Society report in 2009 stressed that geoengineering was no alternative to cutting greenhouse gas emissions, but recommended research continue in the event of a climate emergency.

The Oxford Principles are often cited as guidelines for deployment – these focus on transparency, independent governance and public participation in decision-making. And the hostile use of ‘environmental modification techniques’ is banned under the ENMOD Convention agreed at the UN General Assembly in 1976.

Last October the UN Convention on Biological Diversity (CBD) agreed that small-scale experiments in a “controlled setting” could take place, but urged caution, insisting that they should not detract from climate mitigation efforts.

A UK Government statement released in February admitted current regulations were “inadequate”, committing to work with the CBD to review regulatory instruments. It did support further “responsible” research, stressing that decision “does not imply an intention to deploy geo-engineering”.

The trouble for scientists is that unless they can conduct larger experiments in the real world, it will be hard to work out the potential and the consequences of various techniques.

The unauthorised dumping of 100 tonnes of iron sulphate into the Pacific by an American businessman in 2012 is a worst-case example, but there is an evident need for theories to be put to the test.

Limited SRM experiments have taken place, along with the ‘real life’ evidence volcanic eruptions provide. But given a full deployment would likely affect the entire planet, there is currently a glaring gap in our knowledge.

“It’s difficult to imagine any scheme that affects the atmosphere that wouldn’t have an effect on the entire atmosphere, but there are scales,” says Watson.

“So on one extreme we have sulphuric acid and aerosols, and if you inject that near the equator you’re going to cover pretty much every part of the stratosphere in the atmosphere at some point.

“Conventional wisdom goes that the stuff that draws down, called Carbon Reduction Methods (CDR) tend to be expensive, slow and you have a massive problem with storage, but relatively safe.

“SRM tends to be large scale. A sledgehammer to crack a nut, but really cheap. And it depends whether you think cheap is good – I happen to think it isn’t.”

Piers Forster, Professor of Physical Climate Change at Leeds University, believes deployment timescales for technologies are “optimistic”, and says larger trials are inevitable if governments are serious about exploring their potential.

“I think what is really difficult to do is to try and evaluate the impacts, and that is definitely the impact on the global mean temperature, and other things like precipitation,” he said. “I just think that to try and get a significant response you have to do a big experiment. You can’t get away without one.

Various techniques are expected to be explored in the forthcoming Intergovernmental Panel on Climate Change (IPCC) 5th Assessment Report, due out later this year.

It is expected to offer a view on the effectiveness, feasibility and scalability of geoengineering, but is unlikely to back any particular method as a silver bullet in the battle to address climate change.

At best, many view the various technologies  as a ‘sticking plaster’, given they do not address the underlying causes of global warming.

“If you are to consider any geoengineering it has got to be part of a larger strategy,” says Haywood.

Forster agrees, suggesting it could be decades before man’s ability to alter the world’s thermostat either by sucking out carbon or by blocking out the sun becomes a reality.

“Perhaps it could still be done by an individual country – but I do think that people are very optimistic of how much of a technological development you have to take,” he says.

“I also think it’s quite difficult to get stuff up to the altitude to really have a big effect, I do still think with that technology there’s a lot of stuff to do.

“Perhaps you could do something relatively short term like that but I do still think that to introduce a big transformation it will take a big tech development.”