“We lament the failure of parties to launch the negotiations under the UNFCCC’s Subsidiary Body for Implementation (SBI) at the UN negotiations which ended today in Bonn. This is of grave concern to us as issues of implementation are key for the LDCs. We expect this not to happen again at COP 19 in Warsaw later this year.”
Prakash Mathema, Nepal and chair of the group of Least Developed Countries

“While the outcomes of these negotiations are good news, the last two weeks also illustrate with all possible clarity that a lot more work will be needed to get solid results from COP 19 in Warsaw in November. Warsaw needs to achieve a strong package of implementation measures to show climate action is progressing on the ground.”
Connie Hedegaard, European Climate Action Commissioner

“The work (in Bonn) was constructive, but in no way with the speed required and with the needed realization of political importance of the issue… I am personally under the impression that not all countries are ready to actively move towards the new global agreement.”
Oleg Shamanov, Russian climate negotiator 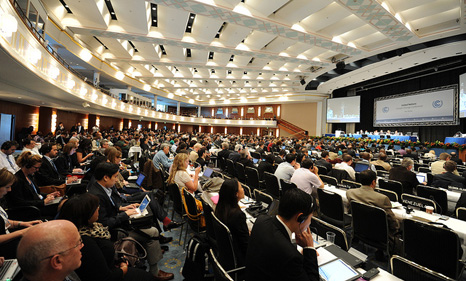 While one track stumbled, there was encouraging signs elsewhere at the Bonn climate talks (Source: Flickr/UNFCCC)

“We’ve made good progress not withstanding the SBI, it’s been a productive session. There’s much more to be done at COP 19. We need a pathway for the ADP (2015 deal) and a substantial, tangible program on raising pre-2020 ambition We’re moving into a less philosophical discussions to a more substantive one.”
Dave Walsh, EU negotiator

“We are encouraged by the progress. Till now negotiators have been looking at options [for the 2015 deal]. Now we are on the specifics of what will contribute to the solution. The SBI was procedurally challenged. All parties agreed there was a problem and how it should be discussed, but ironically, couldn’t agree to get it done. Look out for some creative solutions to that problem. We’re looking into assigning more time than usual to the SBI in Warsaw.”
Christiana Figueres, Executive Secretary, UNFCCC

RT @theodjager: UNFCCC Climate negotiations in Bonn: progress was made at the last minute in efforts to include agriculture in SBSTA

“While most countries have shown a cooperative spirit in the talks so far this year, the Warsaw negotiations will be a test of whether this can be maintained as we move towards more substantial discussions.” Lina Li, Greenovation Hub, Beijing “For the Polish presidency to be a success, Poland must stop blocking enhanced climate action in the EU and adopt a progressive attitude towards its domestic climate and energy policy. We need to embrace a low carbon pathway and make a strategic shift in the Polish energy system in order to be a credible partner in the negotiations.”
Dorota Zawadzka-Stępniak, WWF-Poland

#unfccc more condemnation of Russian, Belarusian, Ukranian block of SBI. Tuvalu: ‘its like crashing a car to prove the seat-belts don’t work

“After losing two weeks to needless procedural wrangling, it is worth recalling the scale of the challenge we face and the precious little time remaining to meet it. We urge climate negotiators to work diligently in the months leading up to the Warsaw conference to progress their work so we can arrive ready to hit the ground running.”
Joint statement, Alliance of Small Island States

“We are pleased that equity was identified as common ground, and governments are talking about effectively facing the equity challenge, the first step to do that would be for developed countries to raise their pre-2020 targets, the second is to lock-in a formal process to determine how equity will be applied going forward.”
Mohamed Adow, global advisor on climate change, Christian Aid