Pacific Island proposals to move UN climate negotiations forward by focusing on the technical aspects of cutting greenhouse gas emissions appear to have received a favourable hearing at talks in Bonn.

The Alliance of Small Island States (AOSIS) suggestion involves delegates examining a series of policies and technologies proven to rapidly lower emissions ahead of this year’s main summit in Warsaw.

The paper calls for a “technical, targeted and results orientated discussion to secure additional and more ambitious pre-2020 mitigation efforts”.

The 44-strong group says that by taking a “practical” approach to the the immediate goal of cutting greenhouse gas emissions, it hopes to move negotiations away from more controversial and intractable subjects that are slowing progress. 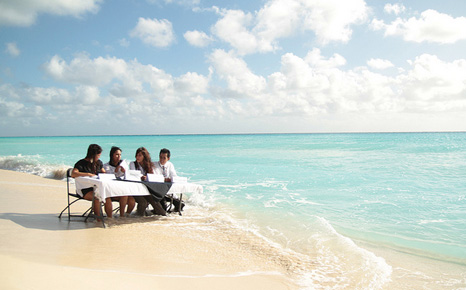 AOSIS members are among the most vulnerable in the world to the potential impacts of climate change.

Many are already suffering from rising sea levels, and want to see greater emission reduction efforts ahead of 2015, when a global climate deal is set to be agreed in Paris.

Delegates from the EU, USA, Norway, Japan and Mali on behalf of the Africa Group gave the concept a cautious welcome during discussions.

“We have heard the proposal from AOSIS and we support it. It is clear we need the technical input to get deeper into the options identified in the technical paper, and through discussion here, and really put out the options for further action,” EU delegate Nicole Wilke said in Tuesday’s plenary session.

Speaking to RTCC last night, another EU negotiator said the paper had brought a dose of realism into talks, and opened up possibilities of sharing mitigation efforts with other bodies more suited to the task.

Writing on the Trust.org website, Nauru Ambassador Marlene Moses, indicated that the approach is designed to depoliticise work at the UN climate talks.

“Only by enabling all parties to enact more ambitious mitigation efforts domestically will they be in a position to take on ambitious commitments under Workstream 1, the line of negotiations charged with developing a new climate agreement to be signed in 2015 and take effect by 2020,” she wrote.

“The discussions would initially look at renewable energy and energy efficiency and, if this technical mode of working proves effective, expand to include other areas where substantial reductions can be made.”

Moses adds that in the lead up to the Warsaw summit this coming November, negotiators and observers would compile a list of energy efficiency and renewable energy policies and technologies proven to reduce emissions.

These could feed into a “technical paper,” written by the UNFCCC Secretariat, which would form the basis of more detailed discussions in a high-level meeting of environment ministers that AOSIS has also proposed.

Any serious move to take the heat out of negotiations is likely to be welcomed by the UN and participating delegates.

Yesterday the Subsidiary Body for Implementation (SBI), which advises on the implementation of UN climate change agreements, was suspended.

Eight days into the two week meeting, a proposed addition by Russia to the agenda of the session dealing with the UN’s decision-making process was not accepted by other parties.

A compromise deal presented to governments in the SBI meeting on Tuesday was rejected by Russia, Ukraine and Belarus, forcing the chair to close proceedings.