UN climate envoys are confident two weeks of talks have seen progress in key sectors, despite a row with Russia that has threatened to overshadow the Bonn meeting.

On Tuesday the Subsidiary Body for Implementation (SBI), which advises on the implementation of UN climate change agreements, was closed because delegates could not agree on an agenda amendment proposed by Russia.

The news prompted many observers to question whether negotiations were in danger of sliding backwards, but speaking to RTCC on Wednesday, lead EU negotiatior Artur Runge-Metzger said considerable progress on developing a framework for a 2015 deal had been made.

“This did not affect the work in the board looking at scientific and technical advice or the Durban Platform,” he said.

“The negotiations on the 2015 agreement and closing the [emissions] gap before 2020 have been progressing well so there was no effect from the non-adoption of the SBI agenda.” 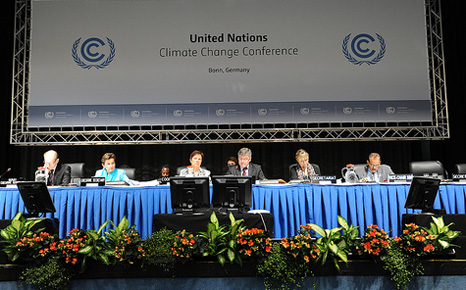 Despite the early closure of the SBI, two other strands of talks appear to have progressed well in Bonn over the past 10 days (Pic: UNFCCC)

While no key decisions will be made in Bonn, conversations about the new global treaty have continued in better spirits than the SBI and with a number of ideas being discussed on what the deal might look like.

The Alliance of Small Island States (AOSIS) has suggested establishing a new body to identify tried and tested emission reduction policies and technologies and focus on spreading them.

Proposals by the US and the EU on how nations can distribute responsibility for sufficient greenhouse gas cuts to limit dangerous climate change.

There is less clarity about a timeline for this work but the atmosphere in the corridors remains positive while these conversations continue to advance.

With a decision this week to award the 2014 UN climate summit to Peru, the pathway towards Paris where a global emissions agreement is expected to be signed in 2015 is now clear.

Warsaw hosts this November’s conference, where the outlines of such a deal are expected to be discussed in greater detail.

Yesterday the latest Climate Action Tracker report underlined the urgency of the situation, revealing that current emissions and mitigation policies have left the world on a trajectory to warm by 4C by 2100.

Runge-Metzger admitted that the failure of the SBI to discuss vital issues, including finance, loss and damage and adaptation is likely to place additional pressure when delegates next meet,

“It takes a lot of time away from the formal negotiations and when you get towards something that you think may be the compromise and then it unravels again, that is not a good feeling but these things happen when we just can’t come close enough to a solution,” he said.

“It will take a little more time in order to move forward again with a formal session of the SBI.”

There is speculation that an additional mini-meeting could take place ahead of the Warsaw COP that could buffer some of the delays in Bonn.

“I have instructed my people to continue work on the items that would have been on the agenda to make sure there is enough progress by Warsaw so that we can conclude them and perhaps even make decisions,” said Runge-Metzger.