In a negotiation where the existence of whole countries, the livelihoods of millions of people, and massive investments in technology and infrastructure are at stake, we should be worried if there is no controversy.

A negotiation without conflict would be one no-one was taking very seriously.  As we accelerate towards the 2015 deadline for a new global climate deal, however, its abundantly clear that the big players are becoming involved, the stakes are high, and as a result, the politics are becoming choppy.

The question now is whether key governments have the diplomatic will to manage the kind of dispute that arose this week in the UNFCCC Subsidiary Body on Implementation (SBI) – the body charged with implementing decisions taken in the wider climate negotiations.

The refusal of Russia, Belarus and Ukraine to accept the SBI agenda held up the work of the body for the whole fortnight, and leaves a headache for those planning the next annual summit in Warsaw.

But first the good news.

Despite delays in the SBI (one of the two technical bodies supporting the main UNFCCC negotiation process), serious, open and mostly friendly discussions continued in Bonn about the shape of the new global climate agreement due to be signed in Paris in 2015, and on ways to increase the speed and scale of our near-term response to climate change.

And in a politically significant move away from Bonn, an agreement to phase down highly polluting HFC refrigerants by US and Chinese leaders signalled that climate change is being talked about at the top table by the world’s super-powers. 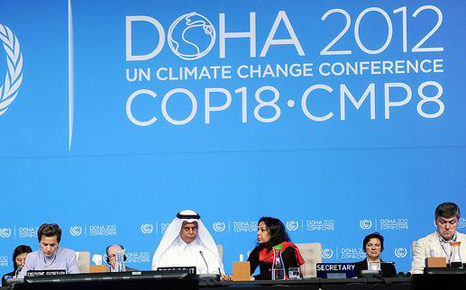 So what is to be done about ‘the Russian problem?’

The dispute arose originally because Russia and its allies felt that they had been treated badly at the end of last year’s Doha summit, where their objections to the loss of millions of tonnes of excess pollution permits – known as ‘hot air’ – were ignored.

The removal of hot air remains absolutely essential to the integrity of a climate deal, and no compromise should be allowed to bring it back into the system.

However, most delegations understand that is difficult for a country to accept a decision affecting their interests, if they feel it has been made without due process.

That is why there was sympathy from almost all the country delegations here in Bonn, for the Russian plea to discuss decision-making procedures.  And why throughout the two weeks, other delegations brought forward solution after solution that would allow this to happen – including creating an entire formal working group dedicated to the issue.

Unfortunately, none of these proved acceptable; leaving observers to conclude that rather than an attempt to secure space to discuss the substantive issue of decision-making, this was a political intervention to make a wider point, and would require a diplomatic rather than a process response.

We can and should decry the loss of precious negotiating time to discuss issues such as unavoidable loss and damage from climate change.  Such losses will ultimately be felt by those suffering the consequences of climate change.

But we should not wring our hands as if this kind of incident has never happened before, or is unique to the UN climate negotiations.

Instead, we should take this as a signal that the negotiations are very much alive, and kicking; and that the sustained leadership and combined diplomatic energy of countries such as China, the US and Germany will be needed to solve this problem, and then to bring the wider negotiations to a successful conclusion.

Finally, as the politics get interesting, we in civil society must also keep our eye on the ball. The devastating floods across Europe are a reminder of what climate change will mean for ordinary people.

Our leaders must be forced to understand this, and to take the mandate to act. With political space and determined leadership, the process will follow.