A major strand of talks at the UN climate talks in Bonn has been paralysed for the past eight days due to a row over decision-making procedures.

Russia, Ukraine and Belarus are angry their protests at the end of the 2012 Doha summit were ignored, and have demanded the process be clarified before other issues in the Subsidiary Body for Implementation (SBI) are touched.

This means vital negotiations relating to adaptation, finance and loss and damage have remain untouched – raising tensions among countries at the meeting.

In an exclusive interview he defends his actions, and says this week’s arguments against his proposals have been “nonsense”. 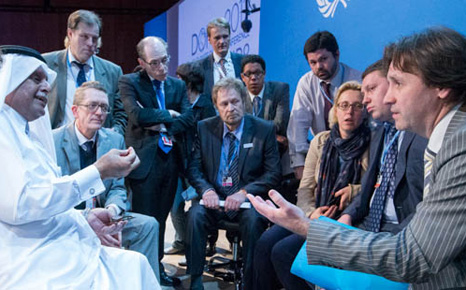 Russia’s anger stems from the 2012 UN summit in Doha, when an extension to the Kyoto Protocol was agreed without its approval

Olga Dobrovidova: Let’s start by you stating, in your own words, what’s happening right now in the talks. One version is that Russia, Ukraine and Belarus have been blocking the process for a week, but I’m assuming you have a different one.

Oleg Shamanov: It’s very easy to put labels on each other, and we have seen this several times in the process – engaging in label making instead of working on actual issues. You know, if we are talking labels, I have to note that in Russian we call this “blaming the good head instead of the bad one”.

The parties who are blocking the process are those unwilling to admit a very simple truth – this process has to finally return to the legal framework and go on according to the rules of procedure.

…What do we hear on our proposed item?

After a whole week of consultations and talking we’ve had, we literally agree on the following. It’s an important issue – everyone agrees on that. It is timely and has to be discussed. But after saying A and saying B we suddenly hit an impasse – we are told that yes, it is important and yes, we should discuss it, but let’s not put it in the agenda.

We don’t understand this kind of paradoxical thinking. This means that either no one actually intends to talk about it, or it is an attempt to bend the rules of procedure to someone’s political interest.

We do not agree, we think that if we want to make normal decisions on the new agreement in 2015, we have to return to the legal framework.

We cannot be blamed for delegations not willing to admit that… We’ve said many times that before we start talking there has to be an adopted agenda. Enough with living a provisional life with provisional results and provisional agendas – otherwise we’ll have a provisional agreement too.

OD: Could you elaborate on why it was unacceptable for you to start the work of SBI without formally adopting the agenda – and just continue consultations on the issue in question?

OS: Ask India, who spent a lot of time talking about how all delegations should be treated equally. India proposed three new agenda items in Durban and later made its own sovereign decision to agree to adopting the provisional agenda and continue consultations on those issues.

Go ahead and ask India where those agenda items are. They were not included and not discussed.

You cannot ignore important and urgent matters. We should not discuss whether to put them on the agenda or not, we should start discussing them and not just pretend we want to do that.

OD: Earlier you guys talked about how this is not about revising the Doha outcomes. Why is this issue suddenly so pressing, then? After 20 years of inaction on rules of procedure, why now and not ten years ago? If anything, why didn’t Russia raise it in 2010 (when Bolivia’s objections to the decision package were similarly ignored)?

OS: We raised it. We did, Russia spoke during all sorts of consultations after Copenhagen, after Cancun, after Durban. We said that we cannot continue working in such a paradoxical way. We did! It’s just that now at this point there’s been real damage.

Don’t reduce this to us trying to reopen Doha. We clearly stated that the way in which decisions were made in Doha undermines their legitimacy. It does, you can’t just stick your head in the sand.

Those decisions contain contradicting points that do not make it easier for countries to decide to ratify the amendment, but we are here and now focusing on the process, on following the procedures.

OD: What is, in your view, the endgame of discussions under this agenda item? Are you looking for a COP decision or what?

OS: Contrary to how it’s being framed on the sidelines, we have said this a hundred times – all of us, in all formats. I had a 25-minute speech in the plenary on that. We want to look into the issue now. If some conclusions are deemed useful, SBI will make them.

If everyone decides that those conclusions should evolve into a formal COP decision in Warsaw – so be it. Of course, as the ones who initiated this discussion, we think we do need both SBI conclusions and a COP decision.

OD: A decision on what exactly?

A lot of other things: what consensus is and how it should be applied, for instance. We could also highlight the role of the secretariat, that it has to perform its functions as required by the Convention, and advise the elected officials.

And when such an official looks [an objecting] delegate straight in the eye and says “hearing no objections”, the secretariat right next to them has to say “you know, that’s against the rules”. That’s what we want to talk about at this point.

OD: Given that right now SBI is not working but debating its agenda, and there are currently no other sessions scheduled before Warsaw – or are there?

OD: So, then, how are you going to respond to inevitable accusations that SBI hasn’t completed its COP-mandated list of tasks because of this?

OS: It is indeed very sad. Going back to where we started – don’t blame this on the good head. If this issue had been included in the agenda right away, we would have been working since day one.

Seriously, just think about it – it’s not about making a decision or adopting any legally binding document whatsoever, it’s about having the chance to talk. In no way are any conclusions or decisions imposed now.

This is what puzzles us. Why is something that’s urgent and important being glossed over?

It is politically motivated, then, not beneficial for someone. We don’t want to play these dirty games, no matter how hard we are blamed for blocking and playing games. We have been absolutely clear about what we want to discuss.

OD: Clearly, this will spill over to COP19…

OS: Not if the issue is resolved here, we have one more week ahead of us.

OD:  But even if, say, it’s added to the agenda and SBI discusses it – it has to then report to COP.

OS: Sure, but it is all going to be part of the normal work process. No problem here.

OD:  Ok then. But for now, after a week of debate there’s no compromise in sight.

OS: The SBI chair offered a compromise right away, it’s just that those who want to hear it do, and those who don’t can’t even hear or see it. We stated right away that the chair’s suggestions have everything we need for a compromise – put the issue in the list of usual Item 17 subitems, things that are usually discussed there, and adopt the agenda.

It’s just odd. If we go down this road we can arrive to a conclusion that our agenda needs to be so clear that it only has two items – opening of the session and adoption of the agenda. I see you’re smiling now – well, don’t. We’ve been, in all seriousness, told “let’s substantively discuss your whole issue under sub-item 2a, adoption of the agenda”. If these are not political stunts and games, what is?

OD:  Do you feel that this whole situation kind of proves why this issue you have raised is important?

OS: We are glad that this rather hard situation gave us another glimpse of what a moment of truth is. Our delegations really do have similar interests here, no matter what’s said on the sidelines about this being an orchestrated game – we don’t play games…

It’s all very simple, really. It’s an important and timely issue, so the delegations introduced it. By the way, we talked about this in Doha, we told everyone what had happened was unacceptable. Why is everyone acting so surprised?

OD:  So you do find this ‘surprise!’ sentiment regarding your issue weird?

OS: Not just weird – paradoxical. That’s what I call “The Land Through the Looking Glass”.

Everything’s confused: name calling instead of substantive work, games and stunts instead of discussing issues that are significant for any future agreement. What else can I say? It’s nonsense.