A major part of the UN climate talks in Bonn remains in stasis for a fifth day in a row with Russia, Belarus and Ukraine demanding clearer guidance over the way decisions are agreed.

The two-week long negotiations are expected to maintain momentum towards a global emissions deal in 2015, with the major climate summit set to take place in Warsaw this November.

The three countries feel their objections were ignored during the closing stages the 2012 Doha climate summit, which saw an extension to the Kyoto Protocol agreed amidst fierce protests from Russia.

They want the agenda of the Subsidiary Body for Implementation (SBI) changed so this can be resolved, a move that has not been welcomed by other countries, who want to see progress on what they see as more pressing concerns. 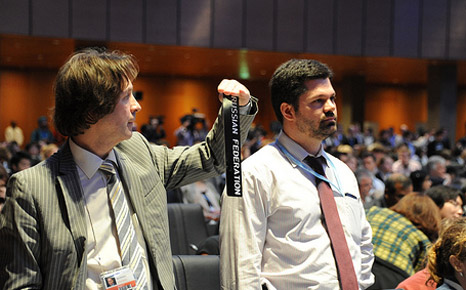 “It’s time to get over this. We respect every party’s right to make any proposals or submissions. It’s their sovereignty. But we should be practical and recognise the urgency of the issues and the work awaiting us in this body,” said China’s lead negotiator Su Wei.

“We can continue discussing how to resolve the agenda issue. Clearly there is no consensus on the adaption. The work of the SBI [implementation group] cannot wait. It’s already Friday – we should not waste our time in Bonn.”

Senior delegates have found themselves pulled away from other meetings to try and resolve the impasse, which Polish chair Tomasz Chruszczow described today as a “crisis”.

The European Union’s lead negotiator Artur Runge Metzger told proceedings he sympathised with Russia’s position, but warned that taxpayer’s money was being wasted, and the reputation of the talks was at stake: “We’re heading down a route no-one understands outside the UNFCCC”, he said.

Speaking for the G77, Fiji’s delegate said efforts to resolve the problem had “hit a wall”, although this was denied by Russia and Ukraine.

UN officials are keen to stress that other aspects of the talks have gone well this week, notably at the Durban Platform discussions over a 2015 deal.

But there are now concerns the SBI will not be able to accomplish its goals for the Bonn meeting, which include working on a loss and damage mechanism, shoring up the UN’s carbon trading system and pushing technology transfer forward.

“It’s in everybody’s interest that the rules of the game are respected, but frankly, the Russians broke the rules first by pulling out of the Kyoto Protocol and by not taking any climate action even though they are a major emitter,” said Kaisa Kosonen from Greenpeace.

This could prompt the UN to push for an extra meeting at the end of the summer, for which it will need more funds, or mean certain texts remain untouched until the Warsaw summit.

And with carbon dioxide levels hitting a record 400 parts per million delegates like the Seychelles’ Ronny Jumeau have called for countries to prioritise their demands.

“That sort of attitude won’t stop the flooding and the tornadoes and the wildfires. Let’s find ways to work around whatever obstacles we have,” he told RTCC.

Decisions at the UN climate talks have traditionally been reached by consensus, a method deemed to be the most effective at establishing what the 195 parties really want.

While the timing of this week’s Russian intervention has been almost universally condemned, most also seem to agree that it is important to establish clear rules on how decisions can be reached, to prevent this causing a high-profile summit to break down.

“I hope clarification here could be positive for the future, it could help the process ahead of 2015,” said Tomas Wyns from the Center for Clean Air Policy.

In theory every word in the negotiation text needs to be agreed upon before it can be signed off.

In practice the chairperson appears to make a judgement on whether he or she can carry an agreement through.

This was a move taken by Qatari Deputy Prime Minister Al Attiyah at the Doha talks, which ensured those concluded 24 hours late, but may have had a more negative effect in the long-term.

“This is a process driven by parties and not a process where the decisions are made by the chair,” said Russian delegate Oleg Shamanov.