Corals can take decades to recover from climate impacts – report

British and Brazilian biologists report in the Public Library of Science One – better known simply as PLoS One – that the richest habitats of the sea could also be among the most vulnerable to climate change.

For more than 17 years, conservationists from Plymouth University in the UK worked with researchers from the Federal University of Bahia in Brazil to analyse the diversity and density of coral reefs and colonies off the coast of South America. Quite early in that 17-year span, there was an El Niño event.

This is a periodic eruption of unprecedented ocean temperatures: it is a natural phenomenon and seems to have happened periodically through recorded human history, distinguished by droughts and wildfires in those places that normally expect high rainfall, and floods on otherwise normally arid coasts. 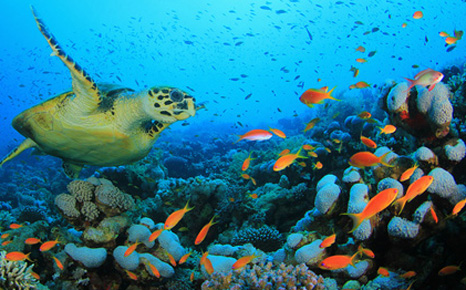 Corals are home to an estimated 25% of all marine species, and the loss of a reef can have a serious effect on marine biodiversity (Pic: Bigstock)

The 1997-98 event lasted for 18 months and was considered one of the most devastating of all, with sea temperatures reaching a global record. Tropical coral reefs were affected almost everywhere; there were also devastating storms and floods in California and forest fires in Borneo.

Corals are peculiarly sensitive to sea temperatures – they tend to bleach if seas get hotter – and many corals live and flourish at near the limits of their tolerance.

Coral reefs are also home to an estimated 25% of all marine species, so the loss of a reef has a serious effect on marine biodiversity, as well as on the incomes of local fishermen – and local tourist operators.

The British and Brazilian scientists monitored eight species of Scleractinian or stony corals and worked with the Brazilian Meteorological Office to build up a complete picture of the environmental conditions and the way these affected species behavior.

During 1998, all the monitored corals showed increased mortality and one species disappeared completely from the reefs for at least seven years. Then, as temperatures dropped, the corals started to grow again.

Recent measurements show that the coral colonies have fully recovered, and are now back to the levels recorded before 1998. That’s the good news. The bad news is that recovery took so long.

“El Niño events give us an indication of how changing climate affects ecosystems as major changes within the Pacific impact the whole world,” said one of the authors, Martin Attrill of Plymouth’s Marine Institute.

“If the reefs can recover quickly, it is probable they can adapt and survive the likely changes in water temperatures ahead of us. However, we found it took 13 years for the coral reef system of Brazil to recover, suggesting they may be very vulnerable to climate-related impacts.”

VIDEO: Why the consequences of even two degrees of global warming would be devastating for many ecosystems