One of Africa’s most distinguished scientists insists that in a warming climate the world needs to adopt genetically modified crops on a massive scale in order to feed the planet’s growing population.

Professor Calestous Juma appealed to political leaders who have rejected the technology to think again and young scientists to embrace the possibilities of GM following years of controversy over the crops. GM has been shunned by much of Africa.

Seventeen years after the first commercial introduction of GM corn there are still sharp divisions in the scientific community about genetically modified plants, fish and animals.

But Professor Juma from the Harvard Kennedy School’s Belfer Center for Science and International Affairs in the US – who also co-chairs the High-Level Panel on Science, Technology and Innovation of the African Union – believes GM developments in crops important to Africa should make people far more positive about new technology.

Speaking to graduates of McGill University, Montreal he said that from 1996 to 2011, transgenic crops “saved nearly 473 million kg of active pesticide ingredients”. 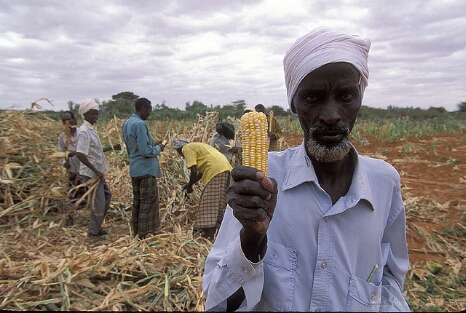 Juma said such crops also reduced 23.1 billion kg of carbon dioxide, the equivalent of taking 10.2 million cars off the road.

“Without transgenic crops, the world would have needed another 108.7 million hectares of land (420,000 square miles — roughly the area of Ethiopia) for the same level of output.

“The benefits to biological diversity from the technology have therefore been invaluable. On the economic front, nearly 15 million farmers and their families, estimated at 50 million people, have benefited from the adoption of transgenic crops.”

However, of the 28 countries today growing transgenic crops, only four are in Africa – South Africa, Burkina Faso, Egypt, and Sudan – said Juma, a Kenyan. He hoped this would change.

Currently a moth-like insect, Maruca vitrata, destroys nearly US$300 million worth of black-eyed pea crops every year, despite the annual use of US$500 million in imported pesticides. Not only are the hearty, drought-resistant black-eyed peas important in local diets, they’re a major export — Africa grows 96% of the 5.4 million tons consumed worldwide each year.

In Uganda scientists are deploying biotechnology against the problem of Xanthomonas wilt, a bacterial disease that ruins bananas and costs Africa’s Great Lakes Region an estimated US$500 million annually. Using genes from a species of sweet pepper, Ugandan researchers are developing a transgenic banana that resists the disease.

Kenyan scientists are also enhancing the micronutrient content of bananas as well as two other staples — sorghum and cassava.

“The techniques mastered can be extended to a wide range of indigenous African crops,” said Juma. “This would not only help Africa broaden its food base using improved indigenous crops, but it would have the potential to contribute to global nutritional requirements.”

The delay in subjecting these products to testing and approval for commercial use is due in part to “technological intolerance,” he said, much of which reflects European anti-biotechnology activism.

“This opposition, however vexatious, amounts to petty political mischief.”

As the world’s food challenges increase humanity must include genetic modification and other technologies such as satellites for monitoring land resources, Juma said. “But these techniques are not silver bullets. They must be part of a wider system of innovation that includes improving interactions between academia, government, business and farmers.”

Despite Professor Juma’s enthusiasm 160 countries have so far rejected GM technology: at present more than 80% of GM crops are grown in just four countries in the Americas.

The main crops are soy, corn, canola and cotton. Critics say the first generation of GM plants are mostly herbicide resistant crops that have benefitted big agri-business because they patented both the seeds and the herbicide used.

Some scientists also point out that use of pesticides had created so-called “superweeds” that have become resistant to herbicides and difficult to wipe out.

Environmental groups say negative attitudes to GM might change if drought and salt resistant crops are developed to help agriculture on marginal land rather than concentrating on commercial crops for already rich farmers.