Quotas and targeted funding could be used to boost the participation of women at the UN climate talks, a new report by UN Women and the Mary Robinson Foundation – Climate Justice (MRFCJ) has recommended.

With only a third of delegates at the talks women and only one in five delegations headed by women, the MRFCJ calls for a series of actions to improve the situation.

At the UN talks in Doha last year, all governments agreed to start work on tackling the problem by: “Promoting gender balance and improving the participation of women in UNFCCC negotiations and in the representation of Parties in bodies established pursuant to Convention or the Kyoto Protocol.”

There has been little evidence of that sentiment in recent years with no significant increase in the percentage of women in delegations which has remained between 30 and 33% in the last five years. 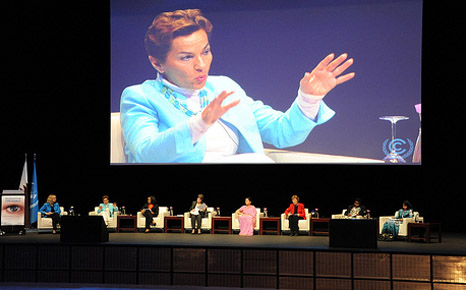 The 2012 Doha climate summit witnessed the launch of the Momentum for Change: Women for results initiative (Pic: UNFCCC)

Speaking at the launch in Bonn on Friday, UN climate chief Christiana Figueres said the issue should not only permeate the procedures at the talks, but also their output.

“We need to go beyond literature and really act on gender issues by implementing gender sensitive climate policies,” she said.

Mary Robinson, president of the MRFCJ said the agreement in Doha was only the first step.

“At Doha last year the commitment was made. Now the opportunity must be seized,” she said.

“In presenting this research, it is hoped Parties and observers are inspired by some of these recommendations, and consider them in preparing their submissions to the UNFCCC secretariat in the coming months on options and ways to advance the goal of gender balance,” added Robinson.

The report makes five key recommendations including setting targets on gender balance for key bodies within the UN climate change process, sanctions on nations that fail to promote gender balance, a public database detailing covering gender balance, a fund to encourage women’s participation and helping new bodies to address the issue during their formation.