Stormy weather set to increase due to climate change

More intense thunderstorms combined with damaging winds are expected to occur because of climate change, according to speakers at the seventh European Conference on Severe Storms being held in Helsinki, Finland.

However because thunderstorms are small in size on the scale of existing climate models it is not possible to tell whether they will also lead to more tornadoes and larger size hail – two of the most damaging problems associated with severe storms.

Delegates at the conference – organised by the Finnish Meteorological Institute and the European Severe Storms Laboratory – are being told that the theory behind  forecasts for thunderstorms becoming more severe is based on the observation that, in a warmer world, the surface temperature and moisture increases create conditions for thunderstorms becoming more intense – and more frequent. 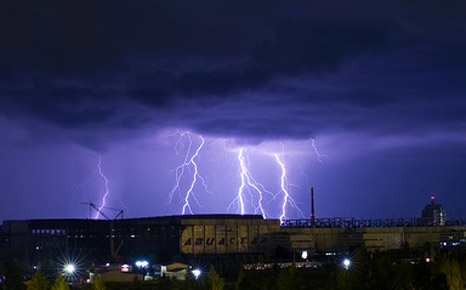 However climate change also decreases the temperature difference between the poles and the equator.

It is this temperature difference, when cold and warm air masses collide, which causes dangerous wind sheer, in turn producing the devastating tornadoes such as occurred last month in Oklahoma.

Due to the limitations of global models, scientists have so far been unable to say whether the risk of tornadoes increases as a result of these twin effects. Harold Brook, a researcher into severe thunderstorms at the National Severe Storms Laboratory in the US, is optimistic.

“According to latest research the intensity of tornadoes will not increase, therefore incidents like in Oklahoma are not expected to be more frequent than today” says Brook.

“However, most of the research on severe thunderstorms and tornadoes in climate change has focused on the US and it is unclear how well the lessons learned there apply to the rest of the world.”

While tornadoes are less of a problem outside the US, heavy hail frequently causes severe crop losses and property damage in Central and Eastern Europe, across Bangladesh, India and other large land masses.  Lightning and large hail also kills people caught out in storms.

In some countries in Eastern Europe special planes are on standby each summer to seed the larger thunderclouds with chemicals to stop the build up of damaging hailstones which can severely damage crops and cause considerable economic loss.

Early warnings like air raid sirens are sounded so people can take shelter to avoid injury from hailstones.

Even in Finland where the Severe Storms conference is taking place lightning, strong wind gusts and hail from thunderstorms are the most damaging severe weather incidents.