Screaming turtles, melting penguins and a prostrate Statue of Liberty greet visitors to the Tuvalu Pavilion at the 2013 Venice Biennale.

It is the country’s first taste of the world’s leading contemporary art exhibition, a dazzling soup of glamour, conspicuous wealth and Great Gatsby-esque pretentiousness.

The tiny Pacific Island nation is banking on art succeeding where politicians and scientists have failed in raising awareness of how climate change threatens its future.

If warnings that Tuvalu might slip beneath the waves by the end of this century have fallen on cold hearts, perhaps a dose of abstract realism might help?

“By delivering a statement at the UN General Assembly, UN climate talks and the COP meetings every year, we seem to be talking to deaf ears,” Tuvalu Minister of Foreign Affairs Apisai Ielemia told RTCC.

“We are talking to the very senior hierarchy, people at the top who are making decisions – Prime Ministers, Presidents, Ministers, top people in Environment Departments. We are just talking to deaf ears, and this is one way of expressing our concern.” 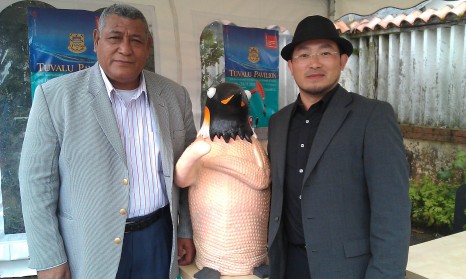 Ielemia was speaking in the lush surroundings of Forte Marghera, the crumbling Napoleonic fortress where Tuvalu’s Pavilion is based.

A 20-minute drive from the centre of Venice, it is a long way from the heart of the Biennale, but Ielemia says he wanted the venue to reflect his country’s geographical and political status.

Dotted around the Fort’s grounds are a series of installations by Taiwanese artist Vincent J.F. Huang, designed to provoke questions over humanity’s relationship to climate change.

Huang is no stranger to the subject – in 2010 he staged the suicide of two penguins and a polar bear from London’s Millennium Bridge – but the Biennale and its global reputation offers him a prestigious platform for his work.

His centrepiece is an oil pumpjack called ‘In the name of Civilisation’, that encourages visitors to ‘fill up their car’, an action that decapitates a turtle and hangs a dying Wall Street Bull.

Next door, six canvasses representing some of Tuvalu’s islands are woven together with a mixture of coral and computer chips, which Huang says illustrates how humans are transforming nature. 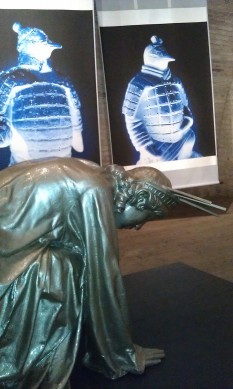 They, along with a floor of rubber turtles that scream when visitors stand on them, form a guard of honour to a ‘Modern Atlantis’ aquarium, which houses a sunken Doha Tower, Empire State building and Chinese Temple of Heaven. Fish and live coral from the Pacific have already started to alter their well known facades.

His most poignant exhibit sees a kneeling Statue of Liberty begging forgiveness from the ghosts of ancient Penguins, decked out in the armour of Emporer Qin Shi Huang’s teracotta army.

Victims of man’s desire to dominate the planet, they represent all creatures affected by increasing levels of consumption and exploitation.

“I think this has a strong visual impact,” Huang told RTCC. “We want to awake people when they use the oil and other energy – we are contributing anywhere and at anytime to the climate change.

“This is not only for Tuvalu – but also for Tappei, Beijing and New York – imagine if the sea level rises – all human civilisation could be underwater. It’s not just about the climate issue. We are living in an age that everything has to be upgraded and built up.

“Penguins do nothing, but we kill them – and Tuvalu is the same. They don’t enjoy conveniences from modern civilisation, but they have to sacrifice everything.”

A 2011 study revealed annual sea level rise in tropical Pacific Islands between 1950-2009 was 5.1mm per year, three times higher than the global average.

But while the situation is now critical for Tuvalu, which could be wiped out if hit by a strong storm surge or tsunami, it is of equal concern to Venice.

The city is no stranger to floods, but residents I spoke to say high tides outside the regular October-January season appear to be increasing, making the completion of a flood barrier system to protect the lagoon an urgent priority.

“This is a part of the world where we think it is very relevant to showcase the climate change issue,” said Minister Ielemia. “Venice is like Tuvalu, in the sense it is also an island and it is already being flooded.”

Other climate vulnerable countries are also using the Biennale as an opportunity to highlight the combined threats of environmental degradation and climate change.

Mokhlesur Rahman’s ‘My Homeland’ depicts Bangladesh’s perennial struggle against natural disasters, while exhibits at the Maldives Pavilion are focused on the theme ‘Disappearance as work in progress’, a none-too-subtle reference to its own battle against rising tides. 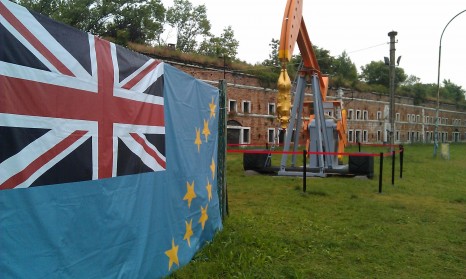 The centrepiece ‘In the name of Civilisation’ demonstrates the devastating consequences of oil production (Pic: Ed King)

Huang hopes to take his installations to the main UN climate summit in Warsaw in November and, amid jokes over delegates walking over screaming turtles, it is clear Tuvalu is willing to explore any avenue in an attempt to generate political momentum to curb rising levels of carbon emissions.

“We are using Tuvalu as an example, but this will affect all countries in the world in one way or another. We feel it because we are tiny islands,” said Minister Ielemia.

“All you see are the adverse effects of what is happening and what will happen if the leaders of the major powers do not hear our plea. If they do not hear that Tuvalu will disappear.

“This concept is very powerful. We could use this in those UN meetings, and say ‘excuse me we won’t be making a statement’, and I may use this, and just put up pictures on a powerpoint and let all the delegates watch all of this.

“I think that would be very powerful.”

The Tuvalu Pavilion is open until November – for more information visit www.tuvalupavilion.com