The UN climate talks resume on Monday for a two week sitting in Bonn as delegations run out of housekeeping tasks and substantive issues come to the fore.

At the end of April a more relaxed gathering of negotiators met to exchange early ideas for the new 2015 global climate treaty that will be applicable to all nations.

“It’s like the calm before the storm, people jockeying for position,” Seychelles negotiator Ronny Jumeau told RTCC at the conclusion of that session.

“I don’t think anyone has put their cards on the table yet. I think the fangs and the claws will come out in June, when the pressure starts on ambition.”

That time is now. 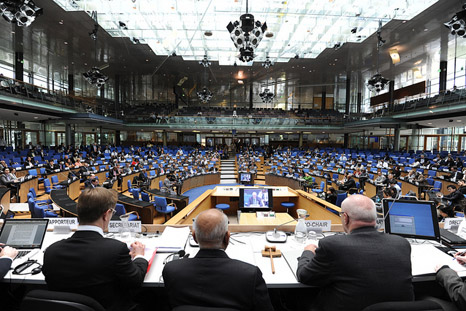 The next round of the talks will dig deeper into the plans proposed in April (Source: Flickr/UNFCCC)

Unlike the Kyoto Protocol, which put binding commitments on rich nations only, the new deal will apply to every country, albeit to differing extents.

How those varying pledges are designed is at the core of the debate.

Brazil has suggested a return to its MATCH calculation that is largely based on historic emissions with those that have put the most greenhouse gases in the atmosphere, being asked to put far less in now.

The EU hopes to develop criteria for a gradation of promises from binding cuts for rich nations to clean development policies for poorer nations.

The US has backed a pledge and review system that would allow countries to set their own targets that would then be assessed by their peers.

EU chief negotiator Artur Runge-Metzger agreed with Jumeau that delegates were not exchanging frank opinions at the April meeting with the focus more on information gathering.

“I don’t think people were showing their true colours. I think they wanted to understand more about what the US was saying,” he told RTCC.

RTCC Video: “Fangs and claws will be out in June,” says Ronny Jumeau

The US proposal is perhaps the best they can offer given the hostility climate policies face back home but former UK climate change ambassador John Ashton has warned that it must not gain traction.

“This is what my friend and colleague Tom Burke calls a New Washington Consensus on climate change. That approach can’t work. We can’t achieve consensus on that basis. That was the lesson of [the failed UN talks in] Copenhagen,” Ashton told an audience at London’s SOAS University last week.

“It’s really important that if there is an effort to impose that New Washington Consensus, that it fails.”

The NGO community is even less enamoured with the idea.

“If the 2020 deal is made-up of a every country doing as it pleases with no allocation of fair-shares of effort, as proposed by the US, then it won’t be worth the paper it’s written on,” said Meena Raman, of the Third World Network.

As well as filling in the details of these proposals and debating their content, it is also important for the Bonn talks to work on a timeline.

The EU’s submission to the UNFCCC started to flag up some potential milestones.

“COP 19 in Warsaw will need to set the path for active preparation for and communication of indicative commitments,” the document reads.

“The Secretary General’s summit of World leaders [in September 2014] may provide a good forum to discuss proposals for mitigation commitments by Parties,” it suggests.

The USA has previously expressed its desire for a slower pace of development on target setting. This could be interpreted cynically or more optimistically, it could be a ploy to buy time for the newly ambitious administration to build support back home for deeper cuts.

The new US approach was described as less combative and more constructive. There were no reports of a dramatic shift in its position.

Poland, the host of the next COP summit in Warsaw this November has begun working with France, the likely host for the decisive 2015 meeting where the global deal must be agreed.

It is a delicate stage in the negotiations and maintaining and growing trust between parties will be vital.

China called throughout the Doha climate talks at the tail end of 2012 for a roadmap from developed nations to show how they would scale-up climate finance from around $10bn a year now to the $100bn a year that the Green Climate Fund has been asked to hit annually by 2020.

Runge-Metzger says that was not going to happen before developing countries have shown what projects they plan so that the funding can be designated where it is needed most.

“We agreed to talk about the roadmap in Warsaw. It has to be routed in reality and reflect what is really happening on the ground. When it comes to finance, we can’t just draw a line in the sand without knowing which programmes and projects can be financed,” he said.

“No government has sufficient public finance to park it somewhere. The private sector is looking for things to do on the ground, but that depends on the preparedness of developing countries.”

It is only natural that greater stakes will mean fiercer negotiations. The hope will be that enough progress will be made to ensure Warsaw is set up to deliver its contribution to the 2015 deal as the time for talking dwindles.