Negotiations towards a global climate deal in 2015 will not be effective unless countries demonstrate they are implementing clean energy policies at home, UN climate chief Christiana Figueres has warned.

The latest round of international talks on reducing global emissions start in Bonn today, aimed at developing a framework for a treaty that can be presented to the main Conference of the Parties in Warsaw in November.

“While we negotiate the new universal agreement, we must not forget that governments must deliver on existing agreements related to finance, technology and capacity-building,” Figueres said.

“Because of this, implementation of the agreed support systems must continue with the same urgency and focus as the ADP [2015 deal] negotiation. I look forward to seeing success showcased across all key areas of climate action when we meet again in Warsaw.” 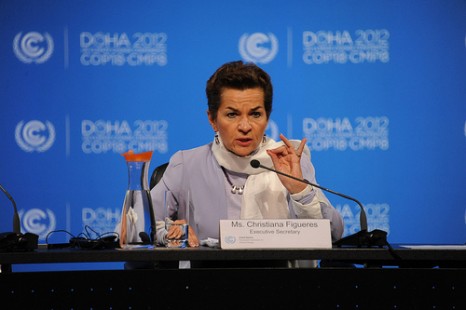 Finance and emission reduction pledges made by richer nations are deemed as inadequate by many of the world’s poorer states, who can expect to suffer most as the world warms and extreme weather events increase.

The European Union, which usually sets the ‘ambition benchmark’ for developed nations, says it has “met and even surpassed” its own fast start finance obligations.

Many observers disagree, arguing many finance flows from rich to poor states consist of loans and are often old money presented as new. This is expected to be a contentious area of debate at the Bonn round of talks.

Negotiations for a 2015 deal are now at a “crucial conceptual phase” according to Figueres, who called on delegates to “capture the energy and dynamism” of business involved in the renewable energy and clean tech sectors.

While efforts to construct an agreement that all nations can accept are ongoing, a separate stream of talks will focus on how to boost mitigation and adaptation efforts in the immediate future.

A workshop on pre-2020 ambition will focus on energy, including on how to scale up renewable energy, enhance energy efficiency and consider carbon capture and storage. Delegates will also hear proposals from observer organizations on how non-state actors can contribute to collective action on climate change.

And on June 11 the International Energy Agency will present its latest World Energy Outlook Special Report “Redrawing the energy-climate map”, which will lay out important new insights into the future track of global greenhouse gas emissions.

Other key discussions include talks on institutional arrangements that provide the most vulnerable populations with better protection against loss and damage caused by slow onset events such as rising sea levels; on clarifying ways to measure deforestation; and on avoiding negative consequences of climate action.

Delegates are also expected to review the adequacy of the 2°C goal agreed by governments in 2010. A study published by the German Institute for International and Security Affairs, which advises the German government, said today the goal is “no longer feasible”.

Two degrees or not?

It suggests world leaders either allow the 2°C goal to become a target that can be temporarily overshot, accept a higher benchmark, or give up on it altogether. This move would be fiercely opposed by Pacific Island states, who believe a 1.5°C target is necessary to prevent their nations disappearing under the waves.

An earlier session of UN climate talks held in May was deemed to have been a success, largely due to the fact delegates were willing to engage and discuss various proposals for building an international consensus on climate change.

That particular gathering was never intended to herald a major breakthrough – this one is expected to produce results – which means that spirit of cooperation is likely to evaporate.

“The first meeting this year demonstrated that the negotiation is on track to achieve the agreed milestones and objectives,” co-chairs Jayant Moreshver Mauskar and Harald Dovland said in a joint statement.

“We have already seen many areas of possible common ground. We hope that at this session, governments will build on these areas by engaging on topics where differences can be bridged and further enlarge common ground.”