A report sketching out the framework of the new UN development agenda has included targets for renewable energy, the eradication of fossil fuel subsidies and energy efficiency.

Earlier this year, Saudi Arabia was understood to be opposed to any energy goals other than those dealing with access and wanted no stated preference for specified sources.

The High-Level panel includes Unilever boss Paul Polman and Queen Rania of Jordon and was chaired by heads of state from Indonesia, the UK and Liberia. 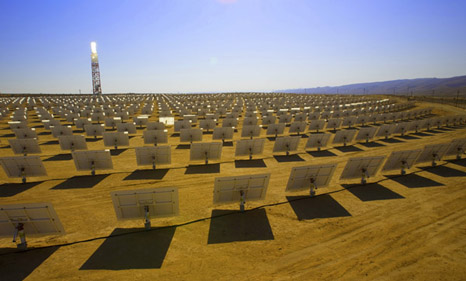 There were objections to setting a target for clean energy within the new development framework (Source: BrightSource)

The “illustrative targets” in the report suggest doubling the share of renewables in the global energy mix by 2030, doubling energy efficiency and ensuring universal access to modern energy.

These mirror Ban Ki-moon’s existing Sustainable Energy for All programme and will add extra weight to their objectives. A report released this week found that those targets will be missed unless the pace of action is increased dramatically.

The G8, the World Bank and a number of other institutions have stated this goal in the past. Enshrining it in the UN’s Post-2015 development agenda would be the most explicit statement of intent on the issue so far.

The IMF recently withheld a loan from Egypt until it agreed to reform its substantial fossil fuel subsidy regime.

The eventual outcome of the panel’s work will be a set of Sustainable Development Goals (SDGs).

The SDGs were established at the Rio+20 summit and are set to replace the Millennium Development Goals (MDGs) which end in 2015.

The main objective is poverty alleviation but the focus on sustainability could add momentum to climate-friendly development at a time when countries are starting negotiations over a legally binding emissions treaty also set to be agreed in 2015.

Negotiations on that deal, handled through the UNFCCC, will resume in Bonn next week.