EU: US climate plan could put 2°C goal at risk

A proposal by the US for nations to set their own greenhouse gas reduction targets could put the goal of limiting warming to 2°C at risk.

That was the warning from the EU’s chief climate negotiator Artur Runge-Metzger ahead of a meeting of governments in Bonn starting June 3.

The US has suggested that the new 2015 treaty on climate change should be based on countries setting their own emission reduction targets that would then undergo the scrutiny of their peers, a system referred to as pledge and review.

“From the EU’s point of view, it still sounded like something that would risk leaving us facing a gap in our ambition. Something we are facing already now until the year 2020,” Runge-Metzger told RTCC. 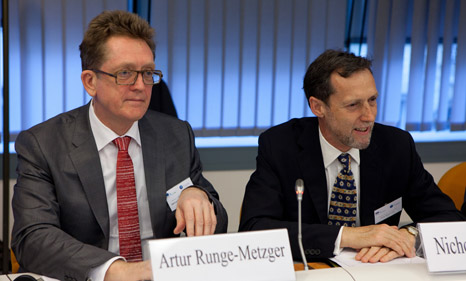 Artur Runge-Metzger has warned that the US plan could fail to draw deep enough cuts to stay within the 2°C warming limit (Source: European Commission)

UNEP has reported an eight gigatonne CO2 gap between existing pledges to reduce emissions, and the scale of cuts necessary to avoid dangerous levels of warming by 2020.

“The big question for us is how can that be avoided and how robust will the process be in determining what everyone will have to do on mitigation. That’s where discussions could focus a little more during the next round in Bonn,” said Runge-Metzger.

Former UK climate ambassador John Ashton said last week that attempts by the US to build consensus around a lowest common denominator “must fail“.

Governments are negotiating a treaty to commence in 2020 that will require all nations, rich and poor to make some form commitment to address greenhouse gas emissions. It must be agreed by the end of the Paris climate summit in 2015.

Runge-Metzger believes much of the interest in the US plan at a recent workshop, was about asking questions, rather than a sign of implicit support for it.

“I don’t think people were showing their true colours. I think they wanted to understand more about what the US was saying,” he said.

Asked whether governments took warnings on climate change such as the 400ppm barrier being passed and reports by the IEA and the World Bank seriously, Runge-Metzger said time would tell.

“We will only be able to tell after the COP21 [summit] in Paris in 2015. I think that our partners at the negotiations take these documents seriously,” he said.

”The question remains however, that if you add up what everyone puts on the table is it going to be enough. That’s the big question for the whole negotiations till 2015.”

The EU proposal, dubbed a spectrum of commitments, would see countries making different types of pledges depending on their wealth and ability to make such changes.

These could vary from binding emission reductions to implementing low carbon development policies. Runge-Metzger said they will present more detail in Bonn on how these might be determined.

He also stressed it would not involve changing the UNFCCC’s convention that classifies countries as industrialised or otherwise.

Poor nations are not required to take as much responsibility under the Convention. The classification was done in the 1990’s and counts South Korea, Qatar and Singapore as developing.