The EU has already beaten its Kyoto Protocol target to reduce greenhouse gas (GHG) emissions by 20% compared to 1990 levels.

That’s the claim made by the UK based campaign group Sandbag.

Figures released by the European Environment Agency (EEA) on Wednesday showed the bloc had cut its emissions by 18.4%. Sandbag argues that when the purchasing of overseas carbon offsets is added, the actual figure is 21.4%. 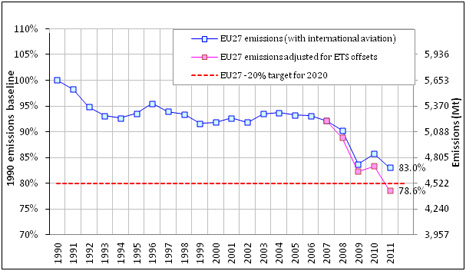 The pink line is Sandbag’s projection of EU emission cuts including offsets. The red line is the EU’s Kyoto target (Source: Sandbag)

The EU has said it would increase its Kyoto target to 30% if other developed countries took on similar binding commitments through the UN’s climate agency, the UNFCCC.

It signed up to an extension of Kyoto in Doha last year but said it would not alter the target. A review of the goal will take place in 2014 when it will have to decide whether to increase its international target.

“As the world’s nations prepare to agree a new international climate deal in 2015, this would be a powerful gesture, encouraging other countries to adopt the ambitious targets we desperately need if we are to avoid dangerous climate change,” said Damian Morris, senior policy advisor at Sandbag.

“Failing to revise the target, on the other hand, will leave Europe doing nothing to fight climate change for most of the next decade,” added Morris.

The next UNFCCC meeting, COP19, will take place in Warsaw this November. It will begin the process for all nations to indicate what type and size of commitment they will take on for the new 2015 treaty. The so-called Durban Platform will require all governments, rich and poor to make some form of binding pledge to tackle greenhouse gases.

Jason Anderson, WWF’s head of climate and energy policy at its European Policy office warned the bloc would be wasting its time if it did not increase its target.

“The trend of falling emissions continued even as the EU‘s GDP rose back above pre-recession levels,” said Anderson.

”There’s no reason now to go and sit on our hands for seven years, knowing that by keeping up the recent pace we could reach the 95% cuts needed by 2050 to keep Europe in line with efforts to avoid dangerous global warming.”

The EU is currently deciding on an internal target for 2030 with an initial figure of 40% suggested. The UK has called for that to climb to 50% if other developed nations beyond the EU follow suit.

The EU has called for all governments to have their goals for the UN 2015 treaty finalised before the end of 2014. The EU’s target will likely track its domestic objective.