The emergence of Solar Photovoltaic (PV) technology is one of the great success stories of EU energy and climate policy. But the dramatic progress of recent years could be significantly derailed by a trade dispute that serves no-one’s interests.

The threatened 47% levy on Chinese panels could be in place this summer and Beijing promises retaliation.

When binding EU targets for renewables were agreed in 2008, EU member states introduced incentives for PV and other renewables. Europe became the pioneer of solar tech, and by far the largest market in the world.

The industry has been growing at a rate of 40% a year (see Chart below). In 2012, for the second year in a row, PV was the number-one new source of electricity capacity installed in Europe. 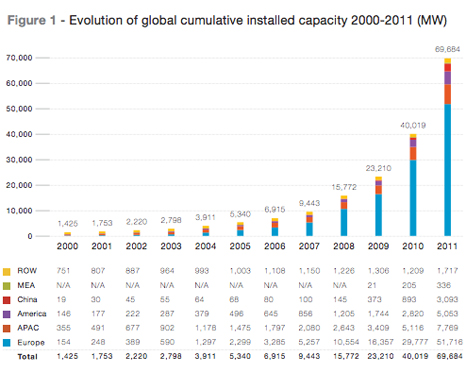 PV has consistently outperformed expectations, with costs of modules roughly quartering since the introduction of targets. While there is much talk of a shale gas revolution, these equally dramatic developments seem to garner far less attention.

The dramatic fall in costs is attributable to the emergence of a global supply chain, which reflects a curious brand of enlightened self-interest.

Europe is yin. Its producers have been selling raw materials and capital equipment to manufacturers of solar modules in China.

EU companies then import, install and service the solar systems. Around 70% of the value-added is generated within the EU. The PV industry directly and indirectly employs around 800,000 people in the EU, a number which could grow dramatically by 2020.

China is yang. Seeing the incentives introduced in the EU, and the attendant market opportunity, in its 11th and 12th Five-Year Plan for the Solar PV Industry, it set out a strategy to become a leading manufacturer of PV modules.

The necessary policy framework and supports were introduced. As a result, Chinese manufacturing capacity soared, and their producers have captured more than 80% of the EU market.

Some in the US and the EU, however, are unhappy with this divvying up of global costs and benefits.

The case for the prosecution and defense

The US imposed tariffs in November 2012, after finding that domestic industry had been damaged by imports of unfairly subsidized Chinese PV modules.

The EU manufacturing lobby, EU ProSun, which represents companies employing 8,000 people in the EU, subsequently accused the Chinese of dumping panels on the EU market, and providing unfair subsidies to manufacturers.

A report to EU Trade Commissioner Karel De Gucht, sets out the case against China. Supports provided are, in many cases, similar to those provided in the EU and US.

China is, however, accused of specifically, intentionally and illegally underwriting an export drive. EU producers have lost revenue and market share, leading to a spate of bankruptcies.

It is countered that China and the EU are in a symbiotic, and mutually beneficial relationship. German taxpayers pay less (in feed in tariffs) when Chinese taxpayers pay more (to subsidise panel prices), as made clear in the chart below. 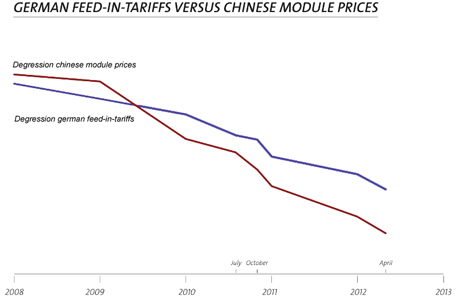 EU Pro Solar argues that its members are the most advanced globally, and that a recovery of the European PV manufacturers could create “cluster effects” in the EU.

AFASE, a lobby group which represents 550 solar PV companies and 60,000 EU jobs, argues that European manufacturing firms’ “own strategic decisions” have burdened them with high cost structures, for instance “their dependence on long-term contracts for polysilicon at high prices”.

AFASE also argues that the overall impact of tariffs would be profoundly negative. They estimate that more than 200,000 jobs and tens of billions of value added are at risk.

EU Pro Solar warns that if Chinese dumping continues and “installations continue to exceed national targets, the support that remains will be lost”, in the form of feed in tariffs.

It is hard to see the sense of this argument. Supports will be lost when PV is competitive without taxpayers’ support. This would be a hugely significant milestone for low carbon technology.

China has unsurprisingly retaliated by arguing that the US and the EU are subsidizing polysilicon, the raw material for solar panels, and is preparing to set anti-dumping duties on imports of it.

Germany, an exporting powerhouse, is concerned that the dispute could spill over.

Its Economy Minister, Philipp Roesler, has argued that it would be a “grave mistake” for the European Commission to impose tariffs.

German Chancellor Angela Merkel echoed these sentiments, speaking at a joint press conference in Berlin with Chinese Premier Li on May 25. She said that she would strive to ensure that the EU imposes no “permanent” tariffs.

A global PV industry competitive against fossil fuels is almost within reach. In 2013 for the first time the majority of new PV capacity will be installed outside of Europe. A McKinsey report from last year finds that the cost could fall an additional 70% by 2020. But progress could be derailed by protectionism.

The Obama administration may be pressing for a negotiated settlement with China, and wants the EU to support a plan that would carve up the global solar panel market. This would likely be a disaster.

Two tails have been wagging the EU dog. At the international level the US is setting the agenda, while within the EU a small lobby group supported by the Trade Commissioner is calling the shots.

The dog is finally reacting: Germany and the UK have led. An estimated 14 to 17 Member States oppose the introduction of tariffs.

Unfortunately, under EU rules, the Commission has the authority to determine whether tariffs are provisionally enacted. Commissioner De Gucht seems intent on pressing ahead. Member States should do all they can to oppose this blunder.

Joseph Curtin is Senior Research Associate with the Institute of International and European Affairs. He has worked for the OECD, NESC (an advisory body to the Irish Prime Minister), and the Sustainable Energy Authority of Ireland, on climate and energy policy-related issues.