Governments will struggle to hit the UN’s sustainable energy goals without a huge shift in the rate of action, a new report has said.

The Sustainable Energy for All (SE4All) initiative was founded by UN secretary general Ban Ki-moon. It set three goals, to double the portion of electricity generated by renewables, to provide energy access for all and to double energy efficiency by 2030.

The Sustainable Energy for All Global Tracking Framework report warned that the rate of electrification for the world’s poorest must double if the objective on energy access is to be met. 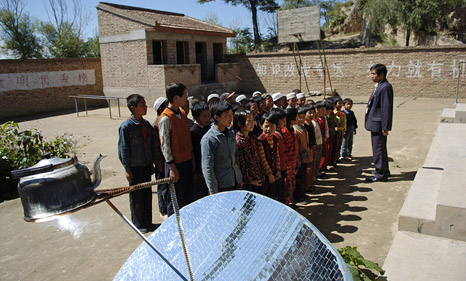 A solar cooker boils a kettle at a school in Gansu Province, China (Source: World Bank/Flickr)

The study, authored by 16 agencies including the World Bank and the World Energy Council, estimates that between 1990 and 2010 around 1.7bn people gained access to electricity, just surpassing the population growth of 1.6bn.

There are still 1.2bn people with no electricity and a further 2.8bn relying on wood and other solid fuels for their cooking and heating.

“Demand continues to outpace supply of electricity. That electricity needs to be affordable, and generated more and more in a sustainable way, and used more efficiently,” said Rachel Kyte, World Bank Vice President.

“To rise to this challenge – to meet peoples’ basic needs and to do so sustainably clearly requires a scale of effort we have never seen before,” she said.

The report estimates that 18% of energy was generated from renewables in 2010, setting a notional target for 2030 at 36%.

“The report shows that there has been progress but it is also clear that much more will need to be done if we are to meet the UN secretary general’s ambitious goals,” said Dr Christoph Frei, secretary general of the World Energy Council.

“The global energy system is undergoing arguably the biggest transformation in modern history and bold policy measures will be required to enable the energy sector to deliver on this challenge,” he added.

Teo Sanchez has worked for Practical Action for 25 years including 16 years working on energy projects in Peru.

He told RTCC that while he welcomes the SE4All scheme and the effect it has had on political awareness of energy issues, there is a significant funding gap.

“At the top level, the policy is favourable to energy access for the poor but that doesn’t mean it is reaching them,” he said.

“The big problem is financing this. It is estimated that about a third of the $45bn that is needed is available. We hear that the private sector must bring much of that finance but we are talking about very poor markets.”

Sanchez said “big decisions” would be needed on fossil fuel subsidy reform, the distribution of money from the carbon markets and a greater emphasis on energy in government budgets.

“It is hard for politicians because many of these investments are medium to long term and they want returns tomorrow. Many will engage in ‘Watts for Votes’ campaigns where they will go to great lengths to persuade villagers that they will bring electricity but after the election, they disappear,” claimed Sanchez.