Canadian scientists have devised a new scale for measuring ocean change – the fish. They have used the changing make-up of the global fisheries catch to detect the signature of global warming.

In a warming world, fish that find the sea temperatures too hot for comfort could move north or south, away from the tropics, or to deeper and therefore cooler waters.

Although oceans are warming, and the chemistry of the seas gradually changing, William Cheung and colleagues at the University of British Columbia report in Nature that it has not been easy so far to detect any evidence of change for these reasons: because over-exploitation of the traditional fishing grounds, and greater pressure on more distant and deeper waters, made it difficult to identify any climatic effect. 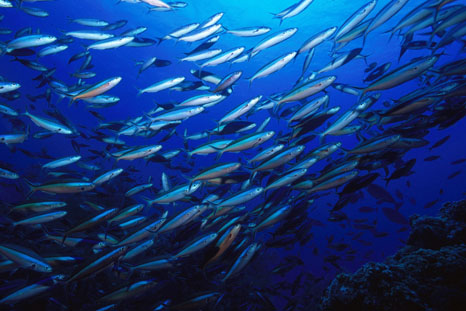 Scientists have tracked the migration of fish to uncover rising temperatures in the oceans (Source: Flickr/Andre Pinho)

But the researchers tried a different approach: they calculated the temperature preferences of fish species – confusingly, they called this the mean temperature of catch – and then they analysed the annual haul of 990 species across 52 large marine ecosystems between 1970 and 2006.

Their new scale of measurement revealed that overall, oceans were warming at a rate of 0.19°C per decade, and in the non-tropical regions even faster: at 0.23°C per decade.

In some regions, the rate of change was much faster. The north-east Atlantic, for instance, has been warming at 0.49°C a decade as measured by the fish-scale thermometer, even though sea surface temperatures showed only a 0.26°C rise as measured by other instruments. Warm water species are on the move, to what were once considered cooler seas.

One indicator of such change has been for instance the red mullet, Mullus barbatus, a staple of the warm Mediterranean: this has lately been caught in the North Sea off Great Britain, where it could be replacing the Atlantic cod, and even in Norwegian waters.

Atlantic surf clams (Spisula solidissima) are harder to find off the coasts of Delaware, Maryland and Virginia in the US, but can still be found in deeper waters off northern New England.

But such change is very bad news for fishermen in the tropics, where many of the world’s poorer people are concentrated. The more temperate zones will see a migration of species from the equatorial zones, but no fish are likely to migrate towards the tropics. So as global warming makes the equatorial seas too hot for comfort, fish catches are likely to fall, and another source of nutrition will dwindle.

“This study shows that ocean warming has already affected global fisheries in the past four decades, highlighting the immediate need to develop adaptation plans to minimise the effect of such warming on the economy and food security of coastal communities, particularly in tropical regions,” the authors say.