“The time is gone to think of this whole thing in terms of aid. I am one of those who argues the age of aid is over”.

Not the words of a right wing politician, but Dipak Gyawali, a former government minister from Nepal, one of the poorest countries on the planet.

They illustrate the growing sense of confidence among the world’s Least Developed Countries (LDCs) and a belief that the past 60 years of ‘development thinking’ has not worked.

It is leading many of them to ask rich nations to keep their money and instead focus on ensuring their own economic goals do less damage to the planet.

Gyawali was speaking at the offices of the International Institute for Environment and Development (IIED), which is supporting a new LDC expert group aimed at influencing the UN’s proposed Sustainable Development Goals (SDGs).

Chaired by former Haiti Prime Minister Michèle Duvivier Pierre-Louis and made up of delegates from Bangladesh, Bhutan, Burkina Faso, Cameroon, Eritrea, Gambia, Mali, Nepal, Uganda and Senegal, the group can claim to speak for a wide section of the developing world. 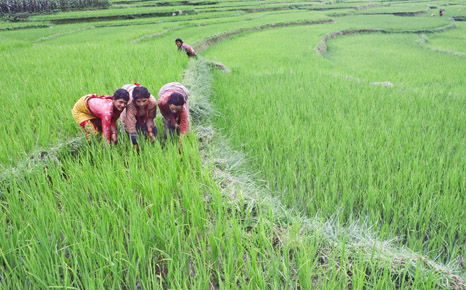 Like their LDC colleagues at the climate talks, they are tired of ‘broken promises’ from rich nations. And in an interesting twist, their fear of losing development cash appears to be receding.

“Aid is an instrument of foreign policy to influence southern governments,” said Gyawali. “It might be OECD aid needs to go to targeted sectors like medical drugs, but standard development has to be done by working out how LDCs use their own money.”

Despite calls for the UK overseas aid to be slashed, British Chancellor George Osborne recently announced the budget will be fixed from 2013 at the international target of 0.7% of national income.

But whether the billions that have been transferred from the Global North to South have been effective is hotly contested.

Some say it’s a waste of money and funds kleptocratic third-world rulers, others argue it’s simplistic to argue that the failure of some projects, negates the need for aid.

Leaving those to one side, what is revealing is that representatives from poorer parts of the world feel in a strong enough position to start dictating terms and setting the agenda at high-level UN negotiations.

If this group is indicative of a wider policy change, these countries appear to be getting to the point where they will suffer without foreign cash donations – while calling for greater North-South dialogue and targeted assistance.

“We should rethink international cooperation, of which we need far more in this globalised world, and rethink it in terms of something other than north giving aid to south,” said Gyawali. “That should not be the driving force anymore.

“Shortage of money is not the problem. Most of these LDCs, there’s tonnes of money being spent in the wrong places. The land price in [parts of] Kathmandu is higher than New York.”

Expert group member Youba Sokona of Mali talked of reframing the message: “We want to jumpstart a sustainability path – instead of selling desperation we want to sell hope,” he said.

Forthcoming SDG and climate negotiations offer two forums for LDCs to try and change current development thinking – but their emboldened status does not hinge on the success of these two sets of talks.

“In the past with the Millennium Development Goals the framing was getting poor people out of poverty – it was about developed countries funding that,” says the IIED’s Saleemul Huq.

“The next era is much less in our view about that paradigm continuing – it’s not about the rich giving money to the poor. That remains an unfinished but minor part of the agenda.

“A bigger part is the whole world reaching sustainability, in which the rich are over-consuming and over-polluting. It’s not about them sending money to the poor. It’s about them doing something at home. It’s about their own profligacy.”

The impact of high consumption levels on developing nations were rammed home when a factory building collapsed in Bangladesh two weeks ago, killing 1,100. Leading retailers Benetton, Mango, Primark, Matalan and Bonmarche have since admitted buying products from the factory.

Some European retailers say they will sign an accord to improve safety conditions in factories in Bangladesh, but this was not the first factory collapse, and is unlikely to be the last.

There is a growing anger among all levels of the establishment at the way workers are treated, and the pathetic wages they are paid – albeit many are higher than average salaries in South Asia.

The LDC bloc do not just have the traditional ‘developed’ countries in their sights. They also want the emerging economies of China, India, South Africa and Brazil to think carefully about their resource use and soaring output of greenhouse gas emissions.

Recent experience at the UN climate talks suggests they may have greater powers of persuasion with these countries, particularly through forums like the G77, which are bound by a sense of solidarity.

Huq says the days of viewing the LDCs as “victims” are gone, arguing that the “rich have a lot to learn from the poor”, particularly learning how to live without a “high pollution lifestyle”.

Their influence is limited, economically they are weak, and aid payments are likely to continue for some time to come. But the world’s least developed countries are finding their voice, and they don’t seem too fussed if they ruffle a few feathers along the way.