A new crowd-sourced science project to map all the world’s fossil fuel power stations has been launched.

Researchers from Arizona State University are hoping to create an accurate data set with the location, size, fuel type and CO2 emissions of all the world’s estimated 30,000 power plants running on coal, oil and gas.

The Ventus project will award points for each piece of data that anyone contributes. A trophy will be presented to the person who contributes the most data. They will also be listed as a co-author on the scientific paper that publishes the results.

“In short, you will be famous among our very elite, newly formed global group of citizen scientist enviro-nerds,” the Ventus website states. 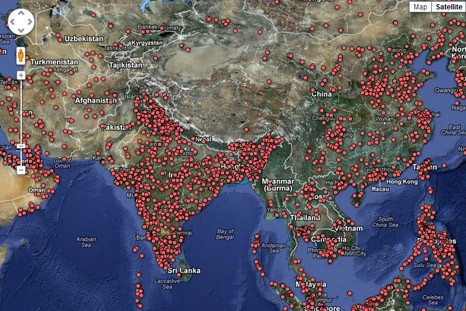 A snippet of the incomplete map released by ASU prior to the launch of the Ventus site (Source: ASU)

The more serious objective is to develop an accurate assessment of the world’s greenhouse gas output.

“Of all the fossil fuel CO2 emissions in the world, power plants account for almost half – so a pretty big portion of the climate change problem is due to the production of electricity everywhere in the world,” said Gurney, associate professor at ASU who is the lead scientist on the project.

“You might imagine that we would know where they are and how much they’re emitting, it turns out we don’t. With the growth in countries such as China, India and Brazil, this lack of information poses challenges for both basic science and climate change solutions.”

As China and India continue their rapid development their demand for electricity is also soaring and coal is currently the cheapest means to supply.

“The pace changes but at the peak they were building the equivalent of a 200MW coal power station every day,” Alvarez told RTCC earlier this year.

This expansion in fossil fuel power has seen China over take the US as the world’s largest emitter of greenhouse gases while India is both a top five coal producer and importer.

The ASU team has already collated existing data from the Center for Global Development on 25,000 installations that it hopes to corroborate with local information as well as including the power stations that it knows are missing from previous studies.

Those who add to the Ventus database will also have access to its information as an added incentive.