United Nations negotiations to contain emissions from planes and ships recommence in Montreal and London this week, with hopes for a global climate change deal in 2015 resting on these two sectors.

Only China, USA, India and Russia emit more atmosphere-warming greenhouse gases than the global contribution of shipping and aviation, which tops 1.6 bn tonnes of CO2 a year.

These talks are difficult given the limited alternatives to each mode of transport and increasing demand around the planet.

Technological fixes from biofuels to airships are still a long way away from making significant contributions. Limiting the emissions of each industry in its current form is best bet.

This week both will meet to discuss establishing some form of financial system to encourage emissions reductions, with many analysts predicting US engagement in aviation talks could pre-empt a breakthrough. 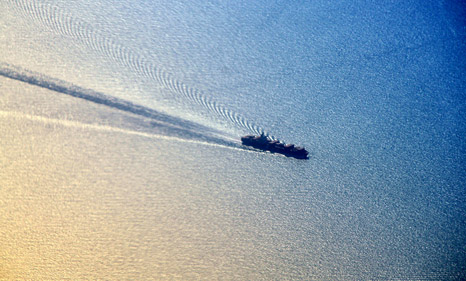 Neither has enjoyed rapid progress but as the UN Framework Convention on Climate Change (UNFCCC) homes in on its 2020 global deal to be agreed by 2015, both risk being left behind.

“It would be crazy for ICAO to get out of sync with those [deadlines], it would mean that the industry was showing slower progress than is being shown elsewhere,” says Jean Leston, WWF-UK’s transport team leader.

The EU triggered outrage by including international flights in its regional carbon market and backed down in November 2012 on the condition that ICAO demonstrated progress on an international deal.

With one general assembly every three years, this Autumn’s meeting is the last timely throw of the dice.

The countries she is referring to are principally China and India. China, she says is more open minded about the possibility of some form of emissions trading or mandatory carbon offsetting system for the sector. India has dug its heels in.

“It sees the ICAO negotiations as a subset of the UNFCCC negotiations and they want Common But Differentiated Responsibility (CBDR) to be first and foremost,” says Leston.

CBDR is a founding principle of the UNFCCC talks designed to ensure rich nations take responsibility for their emissions and poorer countries aren’t over-burdened with obligations that hinder their economic development.

The ICAO climate conference will build many of the arguments ahead of weeks of formal negotiations covering ICAO’s full remit. All eyes will be on US climate change envoy Todd Stern when the agenda turns to climate change.

The IMO talks have come up against the CBDR issue even more violently. The IMO makes rule for ships not countries. Its foundation is built on the idea of treating all countries the same. Fulfilling both of these conditions is not easy but there are signs of progress there too.

Mark Lutes is a policy coordinator with WWF and is a veteran of the IMO talks. He says some of the tensions created by the adoption of major energy efficiency regulations in 2011, are melting away. This means the sector could make a contribution to global emission reduction sooner rather than later.

“They should be looking at the same deadlines as the UNFCCC as the outer limits of what they can do. They should be able to do it sooner. I think shipping and aviation should be able to contribute to pre-2020 ambition as well,” he says referring to the emerging climate treaty’s goal to find new ways to slash emissions prior to the global deal coming into force in 2020.

Leston says the aviation sector is supportive of a market based mechanism with airlines and plane manufacturers joining NGOs and most governments in looking for a solution. The airlines’ preference is for an offsetting system however. This would not generate money in the same way as a carbon levy or an emissions trading scheme.

“We would consider that a terrible missed opportunity because revenue generation could help them invest in greater energy efficiency and biofuels. It would help the industry to decarbonise and could also help provide climate finance to developing countries,” says Leston.

Waning industry support for a system to curb shipping emissions could be the one cloud hanging over the IMO talks in London.

“I get the impression that the industry is sensing less political pressure for an agreement, so they may take a harder line. A few years ago the EU was pushing strongly for a regional or an international measure. The industry could now think that they can get away with doing nothing now,” warns Lutes.

With responsibility for both sectors moved out of the spotlight of the UNFCCC talks, it is easy to over look the talks. As atmospheric CO2 cruises above 400ppm, the opportunity to cut emissions without waiting for the 2015 deal shouldn’t be missed.