Is it time to abandon the 2 degree warming target?

If it is true that everyone has a novel in them, it is equally true that few of us have either the time or inclination to attempt writing it.

Yet storytelling is essential to the process of making sense of the world, and our place in it.

In modern societies, storytelling is also a power struggle, as different interests vie to have their interpretation of reality become the one, universal truth.

The universal climate change truth that emerged from the Copenhagen conference of 2009 was that scientists have discovered that climate change will not become dangerous until the planet has warmed by two degrees centigrade over the pre-industrial average. 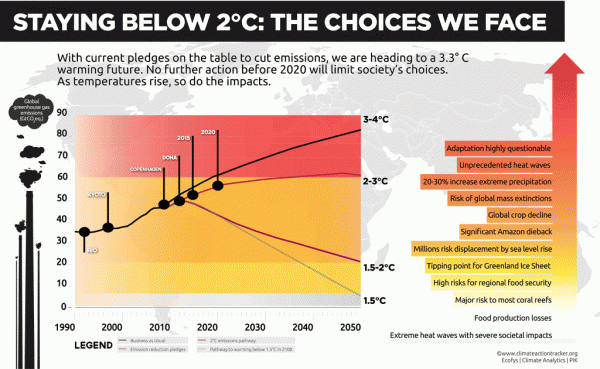 There are, however, a few problems with that story.

First, climate scientists believe deciding how much warming is too much is a value choice, rather than something to be derived from a scientific formula.

Climate scientists also reject the idea that science will ever identify a dangerous limit, because the climate system is simply too complex to be able to predict what changes will happen, where and when.

In addition, evidence is emerging that dangerous impacts of climate change have already begun.

And if all that were not enough to render the two degree idea redundant, it appears increasingly unlikely that it will be possible to keep warming below two degrees.

So, what now? Do we carry on believing the two degree dangerous limit story, regardless?

Such a response risks undermining already fragile levels of trust in climate science, simply because reality is diverging from the claims attributed to climate science.

The severe winters experienced in the UK in recent years were not predicted by climate models, leaving more sceptical people asking, ‘whatever happened to global warming?’

To continue chasing a limit that we no longer have any chance of achieving will simply make the proponents of such a strategy look foolish.

It may be possible to retain the two degree aspiration, but no longer talk of it as a limit which separates safe climate change from dangerous climate change, though again, such a renaming exercise could impact negatively on the credibility of those who have previously advocated two degrees as a dangerous limit.

Other researchers have suggested retaining the limit, but plan on the assumption that the limit will be exceeded, and begin adapting for four or more degrees of warming.

However, one of the justifications for the two degree limit is that above that level of warming runaway climate change begins.

It is difficult to imagine what adaptation measures would be an adequate defence against the ‘civilizational collapses’ environmental commentator Mark Lynas has identified as resulting from four degrees of warming.

Another option is to abandon global targets and instead concentrate efforts on more local mitigation and adaptation activities.

However, global economic policy is focused on giving trans-national corporations freedom to move around the world wherever profits are highest.

Countries which introduce climate legislation which constrains the profit-seeking activities of corporations are likely to see those companies move to a country with less stringent climate policies.

It is therefore difficult to see how such localised responses can be effective without radical changes in global economic policy.

The more important questions, which have never been asked, concern who should decide how much climate change is too much, and on what basis should such decisions be made. If science cannot answer these questions then where shall we turn for answers?

These are profoundly important questions, which require us to find the courage to look beyond the authority of science, expert institutions and neo-liberal politics for answers.

This is not to say those bodies of knowledge have no contribution to make, but they can only be part of discussion, not the totality.

Instead, we need to turn to our own story-telling abilities, to begin imagining what futures await us if we continue on the path of framing climate change as a phenomenon with a two degree dangerous limit.

In so doing, we need to tell fantastical myths about our future, myths not bounded by the technocratic rationalities which have so far failed disastrously to offer any solution.

Deciding what to do under conditions of scientific uncertainty is about values, the values, hopes and concerns which inform the storytelling we all engage in constantly.

Now, in light of the failure of the two degree idea, our focus should be on working out how we can begin a global conversation about our options.

That is an exciting prospect, because through those deliberations we begin to take ownership of a crisis that, like it or not, is going to affect us all.

No one can help us but ourselves. And that is the good news story about climate change.

Christopher Shaw is a researcher based at the University of Sussex. His work focuses on climate policy analysis, public engagement and the politics of low carbon innovation. Follow him on Twitter @kalahar1