A leading development bank has launched a new drive to cut the levels of harmful chemicals released into the atmosphere.

The Global Environment Facility (GEF) now has projects in Asia, Latin America and Africa to address what is an increasingly severe problem in developing countries.

Persistent organic pollutants, organic compounds that are resistant to environmental degradation, are commonly released from burning plastic or other industrial processes. 90% of human exposure is through food, mainly meat.

The World Health Organisation warns that low-level exposure can lead to the suppression of the immune system, lung conditions and cancer.

“We’re ingesting these chemicals, they’re making us sick and killing us,” said Bob Dixon, head of climate change and chemicals at the GEF. “It’s an urgent problem – we need to get after it today”

The bank has produced a film (below) to highlight projects in the Philippines, Mexico, China, Kenya and Tanzania.

The impact of burning waste can be seen in the film when GEF Environmental Specialist Evelyn Swain visits a rubbish tip in Santos City, Philippines.

“We know what chemicals were in the smoke, but sometimes nothing can prepare you for the horrific reality on the ground,” she says.

“As we drove through areas of rancid smoke for the first time, we could make out darker areas. And it wasn’t until we got closer than I realised those shadows were people.”

Families live in the shadow of the site. Small children already show the effects of the smoke, coughing and scratching cuts and sores.

There is no segregation of materials when trucks arrive at the dump.

Waste-pickers sift through the rubbish, collecting recyclables such as plastic bottles, which can be resold.

Fires constantly smoulder among the detritus, covering the workers with a dense shroud of toxic smoke. 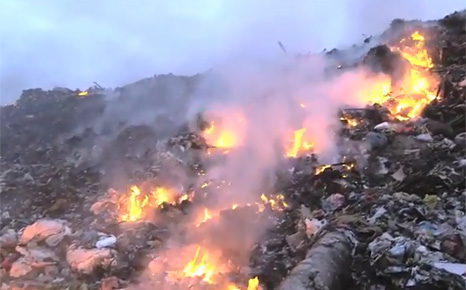 “We see a lot of plastics in this temporary disposal facility. We know there are dioxins and furans as part of the composition of the plastic,” City Administrator Teody Dumagan says.

“We encourage them [wastepickers] to look for other livelihoods, and I think there is a need to close this to protect the health of the community.”

The GEF, World Bank and Environmental Management Bureau are working with six local governments in the Philippines to improve the management of open dumps.

The unlined landfills will soon be closed and rebuilt using environmentally sound methods.

The goal is to reduce the release of dioxins and furans, with an additional benefit of cutting the substantial levels of greenhouse gases that burning rubbish emits.

“The water, air, eneregy and soil – everything is connected,” says GEF chief executive Dr. Naoko Ishii. “We need everybody’s role in this. No single person can solve this problem.

“The challenge is so enormous and we just need to step up our effort. It’s not a problem of future generations – it’s a problem for this generation.”