Pollution from vehicle exhausts and factories is having the unexpected effect of cooling the atmosphere by making clouds brighter and so reflecting more sunlight back into space, say researchers from Manchester University, UK.

The role of clouds in climate change as the world warms is one of the great uncertainties of science. The findings, published in Nature Geoscience, are a considerable advance in showing how humans are influencing the climate.

NASA, which runs the US space programme, says that clouds have an enormous impact on the Earth’s climate, reflecting back into space one third of the total amount of sunlight that would otherwise warm the planet.

“Because clouds are such powerful climate actors, even small changes in average cloud amounts, locations, and type could speed warming, slow it, or even reverse it”, NASA says. 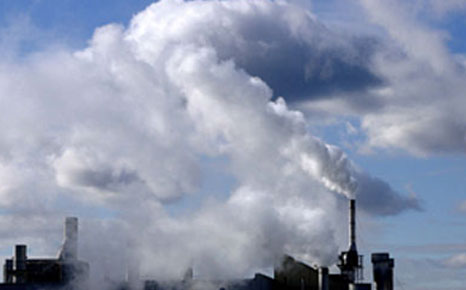 Every day humans pump vast quantities of pollutants into the atmosphere – many of which are absorbed by clouds (Pic: UN Photos)

Clouds are made up of tiny water droplets suspended in the air. These can begin from natural particles like sea spray or dust but can also be formed from man-made pollutants from vehicle exhausts or factory chimneys.

According to Professor Gordon McFiggans, from Manchester University’s School of Earth, Atmospheric and Environmental Sciences, organic material from these sources is quite volatile and in warm conditions exists as a vapour.

Under moist, cooler conditions where clouds form, the molecules of pollution make large particles that act as seeds for cloud droplets.

The mechanism for producing these cloud droplets is the same as natural processes from forests. Professor McFiggans gives as an example the aroma of pine, a form of organic gas.

The droplets that give off the delightful smell later form the basis of clouds. The organic gas from pollution does not smell as good, but has the same effect in producing cloud droplets.

“We discovered that organic compounds, such as those formed from forest emissions or from vehicle exhausts, affect the number of droplets in a cloud and hence its brightness, so affecting climate”, he said.

“We developed a model and made predictions of a substantially enhanced number of cloud droplets from an atmospherically reasonable amount of organic gases.

“We did some calculations of the effects on climate and found that the cooling effect on global climate of the increase in cloud seed effectiveness is at least as great as the previously found entire uncertainty in the effect of pollution on clouds”,  Professor McFiggans said.