Failure to find a swift resolution to the European carbon market’s woes could make the bloc’s longer term climate goals too expensive, a powerful group of nine environment ministers has warned.

A letter signed by Germany’s Peter Altmaier, the UK’s Ed Davey and France’s Delphine Batho set a July deadline for plans to reform the struggling European carbon market and said action to protect longer term climate goals must be taken.

“Although we are clear that market interference should be kept to a minimum, a one-off and targeted intervention now would minimise market uncertainty and distortions, and also promote investment in low carbon technologies. A delay [in the reforms] could lead to greater costs in the long-term to meet EU 2050 objectives,” they say.

Earlier today the chair of the EU Environment Committee, Mathias Groote, announced a second vote on reforms to the EU’s carbon market will take place in July. Moves to protect the market were rejected by MEPs in April.

The intervention comes at a significant moment – 35 senior climate negotiators and ministers are meeting in Berlin for the annual two-day Petersberg Dialogue hosted by the German Government. 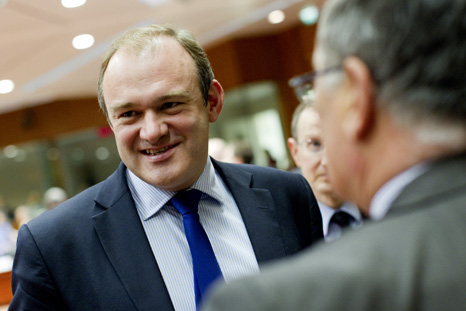 Traditionally viewed as a world leader on climate issues, senior figures within the EU are concerned it could lose this mantle if it does not get its internal workings in order.

The bloc has a goal to reduce emissions by 80% by 2050 compared to 1990 levels. Its emission trading scheme (ETS) needs to be operating effectively for this target to be met.

EU emission trading reforms, known as backloading, involve withholding 900m emission allowances from the carbon market to address an oversupply of credits. This was caused by the cap on greenhouse gas output being place too high and reduced industrial output during the recession.

“In parallel to progress on backloading a renewed focus on more substantive measures to strengthen the system is essential,” the Ministers say.

“We now urge the Commission to bring forward, by the end of the year at the latest, proposals to perform a proper structural reform of the EU ETS, as well as giving investors a clear signal on Europe’s low carbon ambition beyond 2020, in order to stimulate low carbon investments and the most cost-effective emission reductions.”

Backloading is viewed as a short term fix to low carbon prices with larger changes required in the long run, including more ambitious climate change targets, to strengthen the bloc’s climate policy well into the future.

“The letter by this diverse group (from north, south and eastern parts of EU) of environment ministers forms an important political signal,” Tomas Wyns, director of the Center for Clean Air Policy-Europe (CCAP) told RTCC. He believes there are three motivations behind it.

“There is the rising pressure to achieve domestic climate goals and policies with a carbon price of 3 EUR per tonne. The UK’s, Germany’s and Sweden’s domestic targets and policies will be difficult to achieve without a stronger community level policy tool,” he said.

“In particular for the UK, which has introduced a carbon floor price, there is the risk of having an unlevelled economic playing field with the rest of Europe if the EU ETS is not reformed and supported.

“Last but not least, we see across Europe a high level of investment uncertainty and delayed investments in the power sector. The current carbon price, according to most EU power companies, does not incentivise the right new investments in the sector.

The UK and Germany are struggling with their current energy infrastructure. The UK estimates it needs to find £100bn of investment by 2020.

Germany is phasing out its nuclear power stations with cheap coal filling the void, causing its emissions to go up.

“Some governments in countries with an ageing power generation infrastructure are becoming quite nervous since this lack of investments might threaten the backbone of stable and uninterrupted power supply in the future,” said Wyns.

Investment in the renewable energy sector in the last quarter was at its lowest since 2009 and down 22% compared to the same time last year, according to Bloomberg New Energy Finance (BNEF).

“Policy uncertainty played a part in limiting asset finance in the early months of this year,” said BNEF’s report. “Investment in some European countries, notably Bulgaria and Romania, has been dampened by ‘retroactive’ government plans to curb the revenues of already-operating projects.

“Confidence was even shaken in Germany by a recent discussion about a retroactive change to its tariff for existing projects,” said BNEF.

Joint Statement on the EU Emissions Trading System, May, 2013